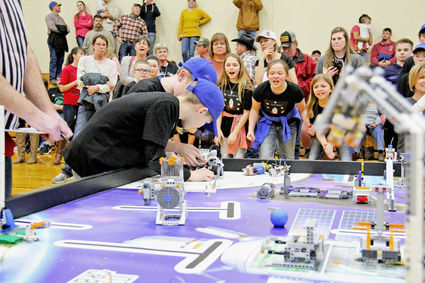 Operators of a Lego League robotics project are cheered on by teammates as they make adjustments to their project's path. Teams from across the Panhandle competed in regional action in Sidney last Saturday.

As part of the competition teams made presentations about their projects, then went through three rounds of hands-on competition where members programmed their small machines to perform tasks in timed events.

Out of the competition, eight teams earned the right to compete in the Nebraska Championship, to be held at the Nebraska Robotics Expo at the Strategic Air Command Aerospace Museum in Ashland Feb. 16.