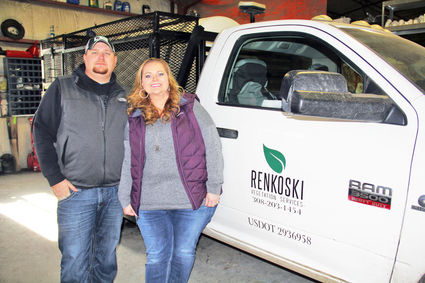 Cody and Jessica Renkoski have built a small lawn business into a national company that is among the nation's leaders in vegetation management. The couple are proud to have built the business out of Sidney, where they plan to remain.

Cody Renkoski really wasn't looking for a career position when he came out of college. Rather, he wanted to follow his passion of shooting sports and wanted a job that would allow him time to pull out the shotgun and keep shooting.

With that in mind, he started a small spray company, servicing lawns and killing a few weed patches here and there. But now, less than 10 years later, he's found another passion and grown that small business into one of the top weed management businesses in the nation.

He still manages to find time to knock a few clays out of the sky, but gone are the lawn care accounts, which last year were sold to another group. Now, Renkoski Vegetation Services focuses on keeping bare ground bare, and keeping the weeds and grass down around some of the nation's high wires with a number of management methods.

Renkoski started his business spraying Russian Olive trees and Phragmites, a tall perennial grass that's become an invasive species along Nebraska's creeks and rivers. When a friend asked if he could spray some dandelions in a yard, he said "sure," and the fledgling business grew quickly from there.

Renkoski was just a couple of years into the spray business when he discovered industrial spraying. He found out that areas around power stations needed to be weed free, as did the sites around oil and gas wells. He added that to his repertoire and before long discovered a great need for bare-ground management.

As the only one to respond to an ad for someone to spray right-of-ways in Morrill County, Renkoski soon became the weed superintendant for that and two other Panhandle counties.

It was after that third year in business that Renkoski's business had grown enough he knew he was going to have to make some decisions. He continued to learn more about the bare-ground and right-of-way management through conferences and other resources.

"Overnight, that side of the business was bigger than the turf," Renkoski said.

So he began to expand that side of the business, knocking on every door he could to find customers. At a conference, he found out BNSF had big needs in the field and knocked on that company's door as well.

"It took me three years to even get a meeting," Renkoski said. "They said I was too small to handle their needs."

But Renkoski kept knocking, all the while putting everything he could into continually building the business.

That patience eventually paid off. He got a "small" contract with the company. And later a larger one.

Now, Renkoski Vegetation Services is one of five companies nationwide helping to manage the railroad's properties, which include 33,000 miles of track on approximately 300,000 acres of land.

Part of his success comes from the way Renbkowski built the business. Ever mindful of the safety of his employees, Renkowsi put on a safety manager, and also a shop manager to keep equipment in tip-top shape. Both are elements that drew BNSF to the operation.

This year, Renkoski and his wife Jessica, who serves as director of business development, are happy to be adding new employees to their workforce, expecting to have 40 people working on projects over 26 states.

They mow along roads and highways in Nebraska and other states. Under high rise power lines, they also keep trees and vegetation down with various methods.

This year the company has also added another office in the Kansas City, Missouri area to meet growing demand in the midwest.

Why not move to Kansas City, which is more centrally located to the business' customers?

"We love it here," Jessica said. "We have good schools, good people, and it's a good place to raise our kids."

And while the work is spread throughout the west and midwest, most of the company's employees are from the area. And that's something the Renkoskis say is important - building a business here, where they can support local families.

That's one of the things foremost in their minds as they continue to build their company. While most of their work is seasonal, they are working toward making sure their employees can have jobs all year around.

In the meantime, Cody still manages to continue to find time for his first passion - travelling to shooting matches when he can, and serving as the Nebraska State Doubles Captain.