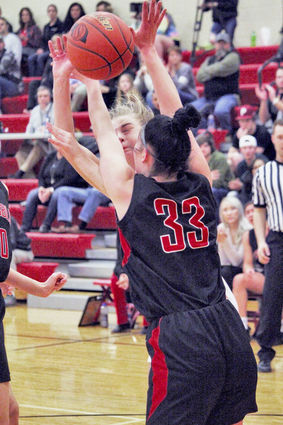 Sidney senior Meaghan Ross gets fouled hard while driving the lane during Sidney's 54-49 loss to Scottsbluff on Tuesday.

Sidney's Lady Raider basketball team was upset by the Scottsbluff Lady Bearcats 54-to-49 in the championship game of the B-8 Subdistrict Tournament on Tuesday at Sidney High School. Sidney bested the Lady Bearcats by 25 points on February 2 in their only meeting of the season, and the Scottsbluff squad was eager for another shot at the number one seed.

The first period opened with both teams playing fast and physical, with not many points scored. After Scottsbluff freshman Mariyah Avila came off the bench and drained a three pointer to break the scoring stalemate, Sidney picked up their pac...