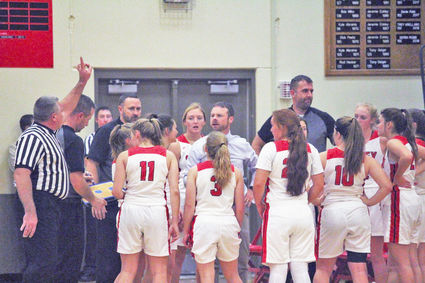 Sidney head coach Tyler Shaw coaches the Lady Raiders during a break in the action. The Lady Raiders face Elkhorn South in the first round of the NSAA State Tournament on Thursday.

Sidney's Lady Raiders are in their final days of practice before they head out for the NSAA Girl's Basketball State Championships in Lincoln.

Sidney is the number one seed in the Class B bracket, and faces the number eight Elkhorn South Lady Storm in the first round on Thursday with a 9 am game time.

The Elkhorn South squad enters the tournament with a 12-and-13 record, facing a Lady Raider team that has gone 22-and-3 on the year and is ranked 21 overall in the state. The Lady Raiders have a veteran squad, many with State Tournament experience, and are led by a core of seniors ready to get...