Falls in District Final to Osmond 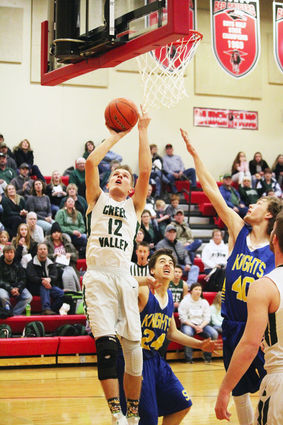 The victory advanced them to the D2-2 District Finals in Broken Bow on Monday night against the Osmond Tigers.

Thursday's Subdistrict final started with the Storm and the Blue Knights playing tight, aggressive defense with neither team able to score until Creek Valley junior Patrick Hansen hit a jumper then a three point shot to open a 5-to-0 lead with about 6 minutes left in the first quarter.

After the Blue Knights responded with two points of their own, Creek Valley reeled off another four points to open a 9-to-2 lead, prompting a South Platte timeout.

The Blue Knights were clearly rattled by the Storm's aggressive defense, and committed numerous turnovers and unforced errors while showing their frustration on the court.

The timeout did little to slow the Storm's momentum, highlighted by Hansen's long pass downcourt that was saved by senior Garrett Sawyer as he twisted and fell out of bounds while passing the ball back to senior Sam Garbowski. Grabowski then hit the layup while drawing the foul for the three point play.

The quarter ended with the Blue Knights running out of answers and trailing 16-to-2. The second period had the Storm increasing their lead to 20-to-4, but then the pace of scoring slowed for Creek Valley. The Storm relaxed their defense, and the Blue Knights were finally able to put together a series of effective possessions in the last two minutes of the period and closed to within 25-to-13 at the half.

Creek Valley head coach Bill Wilber said, "They (South Platte) started to creep back in because we had to pull back from our aggressive defense. They (the officials) were calling it really tight and we had to pull back because of a little foul trouble."

The second half started again with a lot of battling, but not much scoring, as both teams struggled to hit a basket. Creek Valley's lead was at 10 when Grabowski hit a three pointer to make it 30-to-17, prompting South Platte to go on a 6-to-0 run that was ended by Creek Valley freshman Drew Fraass' three point play going to the hoop to put the Storm back up by 10, 33-to-23.

The Storm outscored the Blue Knights 9-to-4 to start the fourth quarter up 42-to-27.

The fourth quarter had the teams going back and forth trading scores, but the Blue Knights were unable to keep up the pace and fell too far behind to catch up. By the final 1:30, Creek Valley was playing keep away until the final buzzer sounded, and the Storm took the Subdistrict title 53-to-36. Grabowski led the scoring with 16 points for the Storm.

"At halftime I told the boys if nothing else we have to match them shot for shot. If they score, we need to take our time and score. If we match them, the game will stay the way it is," Wilber said.

Creek Valley was more than able to match South Platte's scoring, and moved on to the D2-2 Finals. Class D changed their District Finals formula from last year, and now the Storm had to face the Osmond Tigers at Broken Bow on Monday night for the right to head to the State tournament.

Using last year's formula, the Storm would have faced Crawford. Crawford had a 7-and-16 record, and averaged 36.5 points per game.

The Osmond Tigers had a 24-and-1 record and averaged 62.8 points per game, so the new formula put the Storm at a serious disadvantage.

Bill Wilber hoped his team's quickness and height advantage would help check the Tiger's high scoring speedy offense. The Tigers opened the game fast, and after Osmond hit a three pointer to make the score 10-to-1, Creek Valley called a time out. The Storm's height advantage had them grabbing rebounds when the Tigers missed, but the Osmond team was sharp enough that they still opened a 12-to-1 lead at the halfway point of the first quarter.

The Storm's defense played tough, with Garrett Sawyer blocking shots and Oakley Hodges grabbing rebounds, but Creek Valley couldn't score. Meanwhile the Tigers used speed, a razor sharp passing game, and four three-point hits to open a 31-to-11 lead at the end of the first period. The second period started with Grabowski hitting back-to-back three pointers, followed by Sawyer hitting a jump shot for two of his own, but the offensive outburst did not stop the Tigers scoring pace.

At the four minute mark of the quarter, Osmond had built a 41-to-19 lead while the Storm did their best to convert on their opportunities while struggling to hold on to the ball.

The Tigers came back from the intermission leading 49-to-28, and continued to score while ratcheting up the defensive pressure, forcing turnovers and seemingly stealing the ball away at will. The Tigers put up 23 points in the third quarter, while holding the Storm scoreless.

Hansen and Sawyer were each able to add two points in the beginning of the fourth quarter as the Tigers finished off the Storm by a final score of 82-to-32. Garrett Sawyer led the Storm with 13 points in the loss. He also had four blocks and five rebounds on the night. Creek Valley finishes its' season with an 11-and-14 record, 9-and-2 in district.