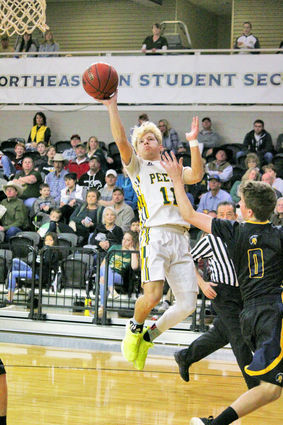 Peetz senior Zach Holtz puts up two points during the Bulldog's 58-48 victory over Denver-Waldorf on Friday.

Peetz's Bulldog boy's basketball season ended with a 62-to-50 loss to the Haxtun Bulldogs in the Class 1A Region 2 Tournament at NJC in Sterling on Saturday. The loss ends Peetz's season with a 17-and-6 mark.

Peetz started the regional tournament on Friday as the number four seed, and drew number nine seed Denver-Waldorf. The Spartans entered the tournament with a 10-and-9 record, but were lead by 6'7" junior Aly Sakho who averaged over 22 points per game. Peetz started the game sharp, with senior Dominic Naegele winning the jump ball over Sakho to give the Bulldogs the first possesion and...