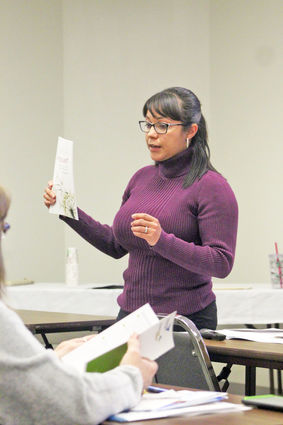 Nebraska Department of Labor Rapid Response Coordinator Maria Rowan explains some of the information presented at a meeting held for workers at the Cabela's Distribution Center who are expecting to be laid-off with the Center closing.

When Bass Pro/Cabela's announced the Distribution Centers in Sidney, more than 100 workers were given the dilemma of "what next?"

A series of meeting were held at Western Nebraska Community College to help workers facing layoff find their way to their next opportunity.

The Nebraska Department of Labor Rapid Response meetings were held to help recently laid off or expected to soon be laid off as a result of closing the Distribution Center. Friday's afternoon meeting was opened by Paula Abbott, WNCC Sidney Campus director. Abbott encouraged those in attendance to take note of the assets avail...