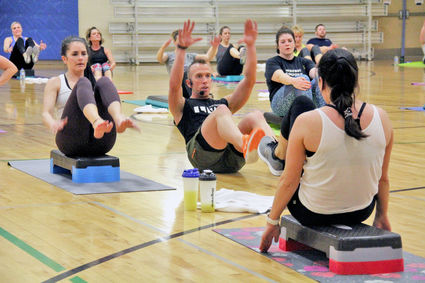 Beach Body Master Trainer Chip Hoffa takes the floor with participants during a Transform :20 Live session at the Cheyenne County Community Center Saturday. The demonstration was one of only a hand full such classes held in the nation.

More than 40 people "gave their all" during a special rollout of a new workout program held Saturday at the Cheyenne County Community Center. By participating in the event, they became part of an elite club.

The program held at Sidney Saturday, Transform :20 Live, puts the trainer live in the room during the workout. Having that "Live" part, with Program Director Chip Hoffa, is what made the Sidney session special.

"This is one of only five test locations across the nation," said CCCC Activities Director Kiersten Richards. "It's really exciting. You've got Pittsburgh, Chicago, and then there is little Sidney. It's an honor to have him here."

Richards learned about the program and the possibility of becoming a live test location through Hoffa's social media. She contacted him, and she struck a chord.

"When Keirsten reached out, she said she had a fitness-minded group who gave a lot," Hoffa said to the question "why here?"

"She said they had kind of reached a plateau and needed a bigger challenge," Hoffa said. "She felt this would be a good way for a new rejuvination in their program."

So while the rest of the country will have to wait until June for the program's rollout, Sidney participants got the chance to test it out and see what they thought.

And it was a good test. The class included both younger and older participants. Some were regular exercise participants, others who hadn't been in a program for a long time. Men and women of all shapes and sizes, including one who was pregnant.

Step aerobics are not new, but Hoffa said Transform :20 adds a new twist - more athletic moves - to the older programs.

During his introduction, Hoffa told the students they could do the exercises to their own abilities, but said he wanted them to push themselves to the point where they had to take a break.

The one thing he wanted out of participants, Hoffa said, "is for you to walk out of this room saying, 'I gave it my all,'" assuring them that their mind will quit before their bodies did.

From that point Hoffa led a high pace, constantly-moving workout. He demonstrated, participated and encouraged, taking his charges through their paces until one-by-one, each took at least a short halt somewhere in the routine to let their muscles and breathing catch up.

It was apparent the ""Live" test was successful, with the phrase "he sure kicked my butt" rolling off more than one tongue at the end.

And it may not be the last time it's heard, either, as Richards plans to make the new challenging program a regular offering at the Center.