'The Well' Opens Doors in Sidney 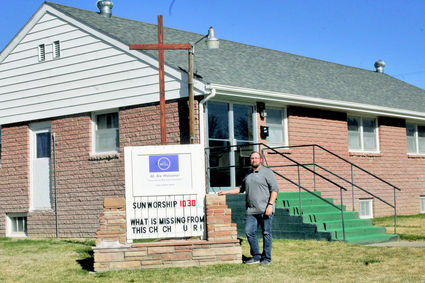 Justin Brown stands outside the entrance to The Well, at 432 20th St. in Sidney. The church started meeting at The Shelter House in 2018.

Everyone has a story, a part of their past they would rather keep there - in the past. However, the past can also be a hearty springboard into the future.

That is a lesson Justin Brown, pastor of "The Well" church at 432 20th St. in Sidney, learned as the new church developed. The Well is an appropriate name for bringing the past to the spiritual future. It is where Jesus met the Samaritan woman, telling her of her past, and she then told the town of a man who knew everything she did (John 4:4-42).

The Well started as a fellowship meeting at the Shelter House. They negotiated the purchase of a church building on the north side of Sidney. It was a surreal kind of coming home in a way. His grandparents helped start the church that had used the building years before he purchased it. He said it is an example of "God smiling on us." He said The Well has planned contrary to typical processes of establishing a new church, and it still works.

"We actually prayed about this for years. The reality is you can see God's sovereignty over the last 30 years," he said.

The building closed as a church, later became a martial arts studio, then was a storage building when it was purchased by The Well. Brown stresses The Well didn't open its doors in Sidney to compete with existing churches.

Brown said the goal is not to "re-invent the wheel" but to return to the original design of a church where all are welcome.

Brown has worked in ministry for several years. His life changed in 2007 when he left his past behind him. From that point, he started working in roles that meet people where they are.

"It is a calling on my life" he said. "When grace is given, grace must abide."

He said God starting refining him almost immediately. He has worked in children's ministries, teen ministries, and now leading a church. The Well is a result of seeing a need for the North side Sidney community, and rural Nebraska.

He said when a church is not involved in missions, "things fold up." He said statistically, many churches are not growing and many are on a decline. He said the goal of The Well is to be real with the people they meet.

"Success isn't in how many people you see," he said. "It is how many you send. I think if people would believe this, we have a movement of God."

The change between Pastor Brown now and the Justin Brown of the past is evident, according to Brown. He said people have come into the church knowing his past wanting to know what changed him.

"We aim to make Jesus non-deniable," he said.

He has worked as a driver's license examiner in Cheyenne County, and pastored at Harvest Baptist Church in Ovid, Colo.

The Well started with Sunday evening dinner and service events, and has expanded to Sunday morning Growth Groups followed by a Worship Service; Community Groups on Tuesday evenings and Youth Ministry on Wednesday evenings.