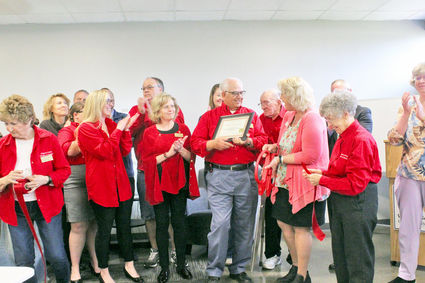 A year and a half in the making, Western Nebraska Community College held an open house and ribbon cutting for its Innovation & Entrepreneurship Center Wednesday.

The center is testiment, said Sidney Campus Executive Director Paula Abbott, to what can be accomplished when people put their heads together to find a solution to a problem. Abbott reviewed how members of the chamber of commerce and Sidney's economic development director got together to see what could be done to help people displaced by layoffs at Cabela's.

That brainstorming resulted in the I&E Center, developed to help people stay in Sidney. One of the goals, she told those gathered, was to fill the needs with available resources.

"There were a lot of people with need, and there are resources out there to help," Abbott said. "What we needed to do was to develop a way to connect state resources with the people in need."

She thanked college President, Dr. Todd Holcomb, for his support when she pitched the idea.

"I've pitched a thousand ideas to him, and this is the one he accepted," Abbott said, bringing laughter across the room.

The laughter increased when Holcom quipped, "She's not lying!"

Abbott also reviewed part of the process in developing the center, where she, Holcomb and other college officials looked at other such operations in the region, picking what they felt was the best from each.

"We wanted to make this the best innovation center possible," she said.

"This (college) team did a lot of things that pushed the envelope," Santerro said. "They did things that are not the norm, and it really made a difference."

Today, the newly-finished I&E Center, which now occupies the former space held by the long-time cosmetology program, has suites of offices, reception and commons areas, and private conference rooms available. The space is designed to give a boost to those who otherwise don't have a place to start their business.

But the professional resources make the big difference. The college has brought in business experts from the state and other areas to provide help to start-ups. There is even a business lawyer, Jeff Shoemaker, himself a recipient of the Center's benefits, to provide guidance.

Shoemaker said as a resource and participant himself, he sees what hopefuls are going through. After his layoff, he went to another state and was away from his Sidney home for 250 days. The chance to come back and work in and with the I&E Center gave him the chance to get back home, and also become "part of Sidney's solution."