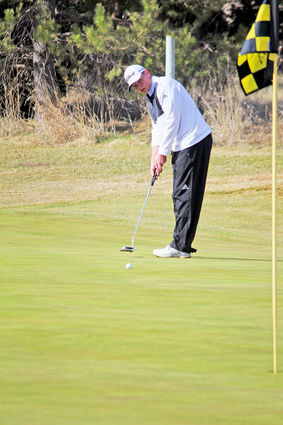 Sidney's Cayden Jobman attempts a long put during recent action. He led the way for the Red Raiders on Thursday with a round of 88 at the Alliance Invitational Golf Tournament.

Sidney's Red Raider boy's golf team traveled on Thursday to compete in the Alliance Invitational, and ended the day with a team score of 399 placing them fourth in a field of five.

The Raiders were led by Cayden Jobman's round of 88, which earned him third place in the individual results. Jackson Witt shot a 94 which placed him ninth in the field. Josh Balance and Trey Douglas shot a 104 and 113 respectively to round out the Sidney team scoring.

Alliance took top honors in the team competition with a 369, beating out second place Scottsbluff with a 382. Mitchell scored a 395 followed by Si...