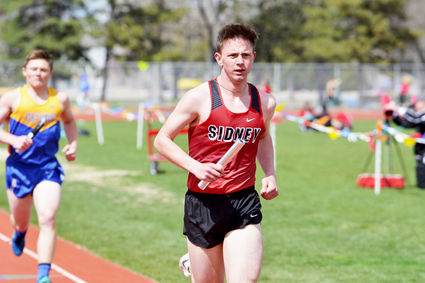 Sidney's Collin Brauer leads the pack during the 4x800 meter relay at the Twilight Invitational at Bearcat Stadium in Scottsbluff on Thursday.

Sidney's Red Raider track and field team traveled on Thursday to compete in the Twilight Invitational at Bearcat Stadium.

The girls 4x800 Relay Team of Morgan Jaggers, Hannah Kennedy, Kimberly Gutierrez, and Lydia Peters took first with a time of 11:44.97, while sophomore Karly Sylvester took top honors in both the Shot Put and Discus events.

The girls scored well in the throwing events, with three finishers in the top six in each event scoring points for Sidne...