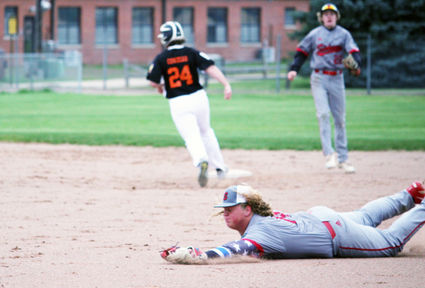 Sidney Legion Post 17 Senior Jackson Witt makes a face-first diving grab of a line drive at second base to retire the Ogallala offense in the second inning during Thursday's 7-to-1 loss at Legion Field.

For the second night in a row, the temperature hovered around the 40 degree mark, but a persistent chilly wind also brought a heavy mist of rain for the duration of the contest. Dante Petersen started on the mound for Sidney, and kept Ogallala off the scoreboard after giving up a one out hit to Ogallala starting pitcher Jordan Callihan. Callihan responded in the bottom of the inning by retiring the Sidney side in order with good velocity on his pitches and a curve ball he could throw at any time for a strike.

Petersen matched Callihan's performance, cruising through the second inning allowing just one baserunner on an error by first baseman Sam Hashman. The Sidney defense quickly redeemed itself with second baseman Jackson Witt's face-first diving catch of a line drive to retire the side and keep the game scoreless. After Witt walked to start the bottom of the second inning, Hashman hit a sharp grounder to shortstop, but the throw to second was mishandled and both runners were safe, giving Sidney its first opportunity with runners on first and second with no outs. Ogallala's Callihan bore down, and struck out Nathan Hofrock, Tommy Ellwanger, and then Dante Petersen hit a pop fly to right field to end the inning.

In the top of the third, Ogallala's Ethan Cobaugg beat out a grounder to third for an infield hit, and then stole second base. Alex Pavlik then hit a hard grounder into the gap at second base, but second baseman Jackson Witt made a diving play to keep the ball in the infield. However, rather than holding the ball, he tried to get the runner at first by flipping the ball out of his glove. The toss went past first baseman Sam Hashman, and Cobaugg was able to score to give Ogallala a 1-to-0 lead. After a stolen base, a groundout moved the runner to third, and the next batter drove him in with a sacrifice fly to center field to move the score to 2-to-0.

Sidney struck back in the bottom of the frame, as Zach Holtz turned a one out single into a run by stealing second and third, then was driven in with an RBI groundout by Isaak Glanz to cut Ogallala's lead to 2-to-1. Petersen then retired the side in order in the fourth, throwing with great velocity and movement to keep Ogallala's hitter off-balance and uncomfortable. The rain intensified in the bottom of the fourth inning, but Callihan kept dealing, using his curveball to rack up two more strikeouts and a groundout of the frustrated Sidney Seniors.

The pitchers duel continued with Petersen again keeping Ogallala off the score board, setting the visitors down after issuing a harmless walk. Callihan answered back with two more strikeouts powered by his curveball, but Sidney's Kyler Lenzen was able to drive a single to centerfield to finally break Callihan out of his rhythm. However, Callihan was able to regroup and struck out Glanz to end the inning.

Petersen found himself in trouble in the top of the sixth inning with runners on the corners and no outs, when Rezac was able to score from third on a groundout. Ogallala's Brennon Halligan was caught stealing trying to go from second to third, then Gonzalez struck out to end the inning, but Ogalla had increased their lead 3-to-1.

Ogallala then brought in Lane Blackwell in relief of Callihan, and had no trouble keeping the Sidney squad off the board. It was Sidney's turn for a pitching change, and Micah Schneider came in to relieve Petersen. Schneider threw well to start the inning, but was victimized by the Sidney defense giving up three fielding errors and a throwing error in successive at-bats. By the time Glanz took the mound to relieve Schneider, it was 6-to-1 with runners on first and third with no outs. Glanz was able to limit the damage and hold Ogallala to just one additional run, ending the top of the frame 7-to-1. Down by six, Mason Mowry was brought in to pinch hit, and struck out looking for the first out. Both Austin Lulf and Tony Young were hit by pitches, giving Sidney runners on first and second with one out. Kyler Lenzen hit a groundout that advanced the runners to second and third, but Young overran second base, and was tagged for the third out, ending the ball game by a score of 7-to-1 for Ogallala.

Jordan Callihan earned the win for the visitors, going five innings and giving up only three hits while striking out eight and issuing two walks. Sidney's Dante Petersen took the loss, running into some tough luck while pitching effectively giving up three earned runs and only five hits over six innings, striking out four and walking three. Sidney only managed three hits against Callihan and Blackwell, and struggled in the field with six errors, four committed in the sixth inning which put the game out of Sindey's reach. Kyler Lenzen led the Sidney offense with two hits in four at bats, while Izaak Glanz had the only RBI of the night on a groundout in the third inning.

Sidney was scheduled to travel north for tournament baseball in Gering, with games on Friday and possibly Sunday.