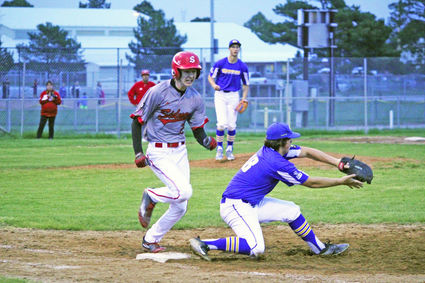 Sidney Post 17 Senior Dante Petersen beats the throw at first to get on base during Sidney's loss against Gering on Wednesday.

Sidney's American Legion Post 17 Senior baseball team hosted the Gering Platte Valley Companies Post 36 squad at Legion Field on Wednesday, and again the defense was plagued by multi-error innings that lead to a 10-to-0 defeat in a run-rule shortend five inning game.

The Seniors drop to 4-and-6 on the season, and all four victories have come against the Bridgeport Bombers. Sidney faced a Gering team that had just defeated them 9-to-1 in the consolation game of the PVCC Tournament on Sunday,

Sidney's Dante Petersen started strong on the mound, getting three quick groundouts to retire the s...