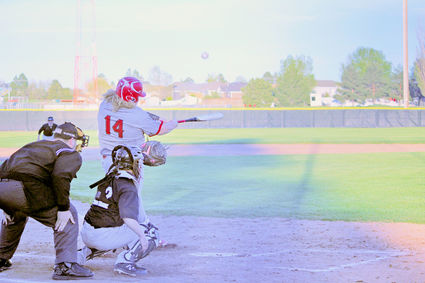 Legion Senior Jackson Witt at the plate during recent action. He pitched eight solid innings to defeat Valentine during the weekend's Wood-Bat Tournament at Chadron.

Sidney's American Legion Post 17 Senior baseball team traveled over the weekend to participate in the Chadron Wood-Bat Tournament, splitting Saturday's games with a loss then a win in dramatic fashion then dropping Sunday's game when they were unable to overcome an early deficit.

A Grant Campbell double in the first inning gave the Seniors some hope, but Franklin shrugged off the hit and struck out the next two batter to put down Sidney in the first. Tommy Ellwanger took the mound for the Seniors, and cruised through the first inning, retiring the side in order on three groundouts.

In the second, Franklin gave up a two out single to Paul Houser, but Sidney could not push the run across. In the bottom of the frame, Gering was able to get two runners on base with a single and a walk, then Franklin helped his own cause by launching a double to right field, bringing home both runs and giving the Gering squad a 2-to-0 lead at the end of two.

The third inning had Sidney again getting some baserunners on with a walk and and error, but could not get the runners home and remained scoreless. Gering added a run in the third on a Riley Gaudreault double to move the Gering lead to 3-to-0. Neither team mustered any offense in the fourth inning, and Sidney went down in order again to start the fifth inning.

Gering added another run on a dropped third strike to extend their lead to 4-to-0. Sidney started the sixth with a Grant Campbell single to centerfield, but again the Seniors could not bring the runner home. Two singles and a walk loaded the bases for Gering in the bottom of the sixth, and a Quinton Janecek triple brought home three runs to give Gering a 7-to-0 lead.

Nolan Hofrock reached on an error to start the top of the seventh for Sidney, but Franklin regrouped and retired the next three batters to end the game with a 7-to-0 Gering victory.

The Seniors next faced Valentine, and the game quickly became a pitchers duel with Sidney's Jackson Witt quickly retiring the side in the first inning, then Valentine's Jayden Owen returning the favor by sitting down the Sidney offense in order to end the first.

Neither team could put up any runs until Valentine finally broke through in the top of the fourth inning, plating one run on a sacrifice fly to right field. Sidney finally converted in the bottom of the seventh when Jackson Witt launched a double, then advanced to third on a wild pitch. Nolan Hofrock was able to score Witt on a groundout to tie the game and keep the Seniors alive.

Witt gave up a harmless single but kept Valentine off the board in the top of the eight, but the Sidney squad mounted a two out rally in the eighth, and with two runners on Tommy Ellwanger delivered a single that scored the winning run for Sidney, ending the game in a 2-to-1 victory. Witt pitched eight solid innings, giving up one run on four hits and fanning 13. Hofrock and Ellwanger were the offensive stars, each driving in a run in the winning effort.

Sidney faced Chadron on Sunday for their final game, and Sam Hashman ran into early trouble on the mound by giving up three runs over the first two innings.

Sidney finally put up a run in the fourth after a hit batsman, an error, and a single allowed Tony Young to drive in a run on a single to left field, making the score 3-to-1 in favor of Chadron. Sidney's run was answered in the bottom of the frame by two more runs by Chadron.

Conner Glanz was able to steal home in the top of the sixth to move the score to 5-to-2, but that was all the scoring for the Sidney squad and they fell to Chadron by a final of 5-to-2. Jackson Witt went 2-for-3 at the plate, and Sam Hashman pitched 4.2 innings giving up four earned runs off of nine hits while striking out four and not issuing a walk.