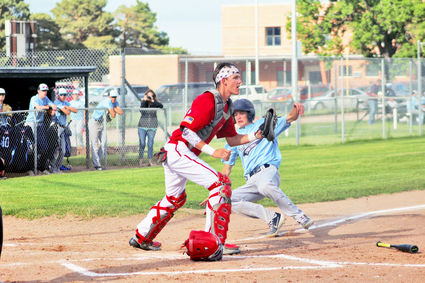 Sidney's Nolan Hofrock waits on the throw home on a play at the plate during the Junior's 14-to-2 loss against Alliance last Tuesday.

Sidney's American Legion Junior team had a busy week, winning three and losing one to raise their record to 9-and-5 on the season.

The week started when the Juniors hosted the Alliance First Nation Spartans Junior team on Tuesday, and Micah Schneider was able to retire the side without any damage after giving up a lead off single. Luke Kasten led off the Sidney inning with a walk, and was able to score on a Dietrich Lecher grounder that was misplayed for an error to give Sidney an early 1-to-0 lead.

A two out single in the top of the second tied the score at one, but Sidney was able to re-...