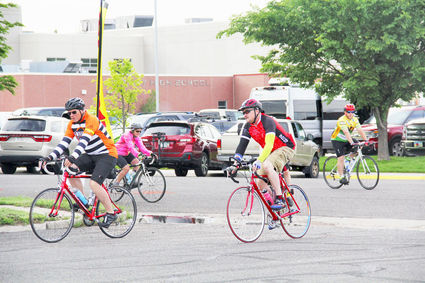 On Tuesday, June 18, bicyclists arrived in Sidney in preparation for the 2019 Tour De Nebraska.

This year, the annual tour started and stopped at Sidney High School with host locations and several stops in between. About 467 riders took part in this year's event.

He said some riders have already expressed interest in bringing the TDN back to the Panhandle area.

Sidney Economic Development Director Melissa Norgard said she talked with many riders who were impressed with the welcome offered by the Sidney community.

"We were excited to be the host community and I think the events in Sidney were received well by the participants," Norgard said.

Norgard noted the weather wasn't perfect with rain Tuesday afternoon and present somewhere within the Panhandle for most of the Tour.

"We could have done without the rain, but overall all the riders had a positive attitude, even through the cold and rainy weather," she said.

Schilling said some of the more experienced riders powered through the wind, rain and chilly temperatures. He noted that for as challenging as the wind was, it has been worse in past years.

"This group tends to be pretty adventurous," he said.

He said overall the tour was a success. He commended the overnight host towns - Sidney, Kimball, Gering, Scottsbluff and Bridgeport - for their hospitality and use of their school facilities.

"We had five days of adventure on the road," he said.

The tour is designed to include lunch locations and overnight sites. Breakfasts and dinners are scheduled at each overnight site, frequently provided by a local organization.

The TDN 2019 started with a rolling start June 19 with riders heading west on Highway 30 toward Kimball. On the way, they were encouraged to stop in Potter and meet the community and its businesses. From Potter, riders continued west, stopping for refreshment and shade in the village of Dix before completing the day in Kimball. Kimball's plans for outdoor entertainment were changed with a predicted storm in the area. However, there was plenty of shade for riders to relax in, and dinner opportunities downtown.

The second full day in the saddle took riders from Kimball north to Gering and through Wild Cat Hills. Along the way, riders could stop at a cafe about halfway between Kimball and Wildcat Hills. The place that likely has most of its business from travelers, truck drivers and rural coffee drinkers was overwhelmed with a sea of bicyclists. Clearing Wildcat Hills, riders could see the coming city limits of Gering.

The hardest challenge for many cyclists is also the one beyond organizers' control: the weather. Cyclists experienced spring-like cold, wind and rain through much of the rest of the week, from just a few miles outside of Gering until arriving in Scottsbluff. Day four started the same as riders had an overnight goal of Bridgeport, but a soaking rain and standing water to start the morning. Rain subsided by the first stop in McGrew and The Pink Palace.

The Tour took cyclists to the Chimney Rock Visitor Center, then to Bayard and north before connecting with US 385 and heading south to Bridgeport.

The final stage included the scenic view of Jail Rock and Courthouse Rock south and west of Bridgeport before arriving in Dalton for some energy food and a break from the cool, damp weather. Returning to the road, cyclists then had just to state on the highway south to Sidney.

Tour De Nebraska was founded in 1988. One of the riders has ridden in all 30-plus tours, including this year. TDN is designed to promote small communities and the community of cyclists.

The program started when Rich and Susan Rodenburg, owners of Bike Pedalers, decided to promote a statewide bike tour in Nebraska. The Tour de Nebraska concept came from a late-night meeting with friends. The first tour spanned seven days and had 10 riders. The program has grown each year since. Nearly 500 riders registered for the 2019 event.

In 2017, the Rodernburgs announced Schilling and his wife Kim as the new directors of the tour. The 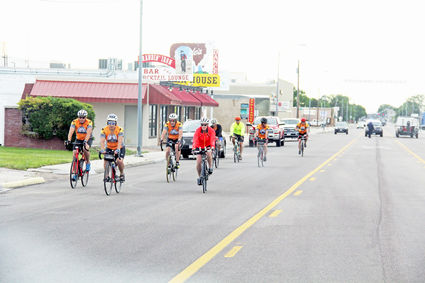 Riders in the Tour de Nebraska head west on Hwy. 30 to begin a trek that took them on a 250-mile ride around the southern Panhandle.

Schilling said some of the challenges in planning a tour is finding communities capable of supporting 500 riders and the support team, and having the support, local hotel support, and support of the local school as an overnight location.