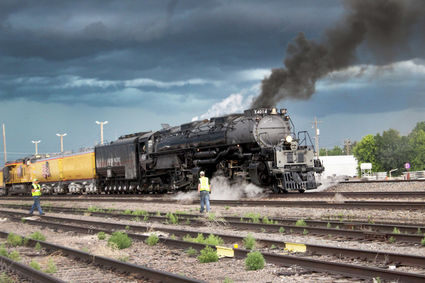 The Union Pacific "Big Boy" belches steam and exhaust as the afternoon storm darkens the western sky Monday. The Big Boy is on a tour of the region in celebration of 150 years since the TransContinental Railroad was completed.

The highway was cluttered with fans, photographers, the curious and train enthusiasts as history repeated itself Monday afternoon.

With the fanfare of an old-time steam locomotive belching steam and black smoke from coal, the Union Pacific celebrated the completion of the Transcontinental Railroad 150 years later.

The Union Pacific's Big Bog steam locomotive No. 4014 made its stop in Sidney as part of a system-wide tour in celebration of the transcontinental railroad's 150th anniversary. The tour started in Cheyenne, Wyo., at the Union Pacific Steam Stop. Scheduled stops include the Pine...