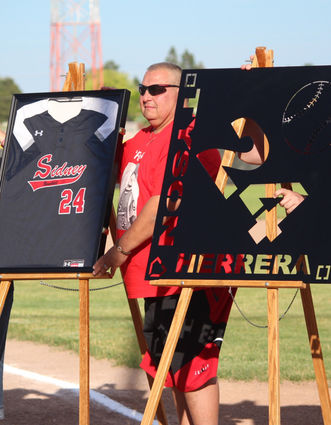 Tim Herrera of Sidney is presented with a number 24 framed jersey during the ceremony on Tuesday honoring the memory of his son Tyson. The number is the first ever retired by the Sidney American Legion Post 17 baseball program.

Sidney's American Legion Post 17 baseball program retired the number 24 in honor of Tyson Herrera, who was killed in a car accident in Wyoming on April 22.

It is the first number ever retired in the history of Sidney American Legion baseball. An emotional tribute to the 25 year old former Post 17 standout included his family, tributes by former coaches, and Tyson's father Tim Herrera and mother Shanna Garvin threw out the ceremonial first pitches for the Seniors contest against Chadron.

Tyson was "the Face of the Team" during the years he played with Sidney, first joining the Senior team a...