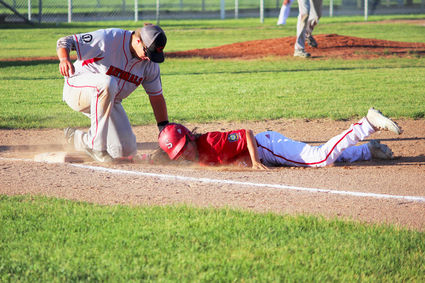 Sidney's Kyler Lenzen gets picked off at first base in the first inning of Sidney's 10-1 loss against Chadron last Tuesday.

Sidney's American Legion Post 17 Senior baseball team battled through the last part of their regular season schedule over the last week, and were unable to pick up a win during the four-game stretch.

On July 2, the Senior squad faced off against Chadron, and after an emotional ceremony honoring the memory of Tyson Herrera, Dante Peterson took the mound to start the game. An infield error allowed Chadron to score a run in the first inning, and the Sidney bats went silent to start the game and stayed quiet throughout the contest.