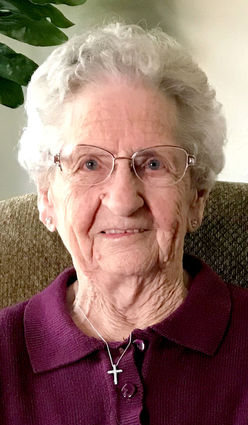 Memorial services will be at 10:30 a.m. Saturday, August 3rd, at Holy Trinity Lutheran Church in Sidney, Nebraska, with Pastor Tim Stadem officiating. Inurnment will follow in Greenwood Cemetery in Sidney.

A memorial has been established to Holy Trinity Lutheran Church in Sidney.

In 1958, she and Bill moved to Sidney where she continued to be a quiet, patient and loving wife, mother and homemaker. Her favorite activities centered around quilting, baking, and gardening, skills she had mastered as a result of having been the oldest of eight children. Besides duties as a caretaker for her brothers and sisters, she helped in the fields driving horses during harvest.

Alvina cared passionately and unconditionally for her husband, children, grandchildren and great grandchildren. Her strength, patience and love were reflections of her strong faith and love of God, which she lived daily.

She was preceded in death by her parents, husband, infant daughter, Diane, five brothers, ten sisters-in-law and nine brothers-in-law.