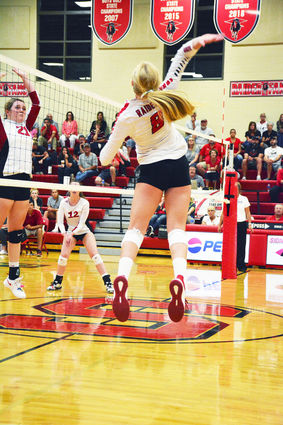 Sidney's Mattie Johnson goes for the kill against Kimball last Tuesday at the Cabela's Athletic Center.

Sidney's Lady Raider Volleyball Team has started its 2019 shedule with three straight wins, the last two coming at the Ogallala Triangular last Thursday. Sidney first faced the hosting Ogallala Lady Indians, and were able to put them away in straight sets, 25-to-21 and 25-to-19.

Senior Mattie Johnson had 12 kills and three service aces while senior Nicole Birner had 20 assists in the victory. Next up was a North Platte team that put up a tough fight, pushing Sidney to extra points in the first set and eventually falling 29-to-27, then also playing a close second set but falling 25-to-20...