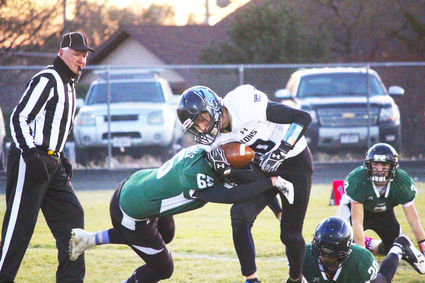 Sophomore Drew Fraass delivers a big hit during the Storm's 58-28 victory over Wilcox-Hildreth on Friday. The Storm defense dominated the game, holding the Falcons to just 6 points in the first half.

The turnaround in the long-struggling Creek Valley football program started last season, when the Storm finished with three wins and a playoff berth. Finally earning its first victory since 2010, Creek Valley went on to lose a road playoff game against the Wilcox-Hildreth Falcons 100-to-56, but the seeds were planted and a team that ended the season at 3-and-6 was growing into a force far more dangerous than their 2018 record. The Storm proved that they could score points, they just needed to shore up the defensive side to take their play to a higher level.