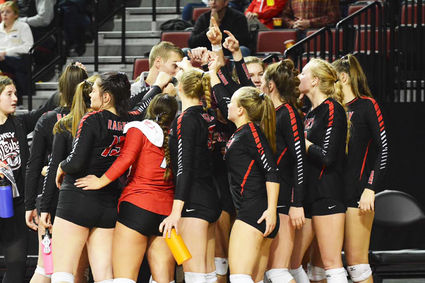 Sidney Head Coach Markus Ehrke rallies his squad during the first round match of the NSAA Class B Volleyball State Championships at Pinnacle Bank Arena in Lincoln on Thursday.

Sidney's Lady Raider Volleyball team ended their season Thursday with a loss to the Omaha Duchesne Lady Cardinals in straight sets in the first round of the NSAA Class B State Tournament.

The Lady Raiders entered the tournament as the number three seed with a 32-and-3 season record while the Lady Cardinals were seeded sixth with a 21-and-17 record.

The Lady Cardinals had a season facing a much higher level of competition, with a large portion of their matches being played against some of the toughest Class A teams in the state.

Prior to the match, Sidney head coach Marcus Ehrke noted that...