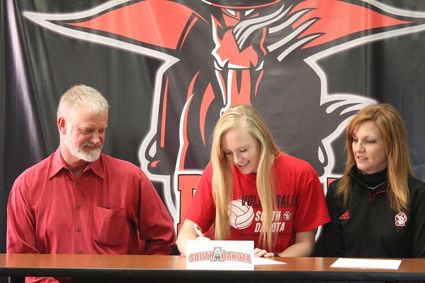 Sidney senior Mattie Johnson signs a Letter of Intent to play Volleyball for the University of South Dakota in the Fall of 2020, accompanied by her father Mark and mother Anne. Johnson considered Missouri, Louisville, and Colorado among other teams before deciding to commit to South Dakota in the Fall of 2017. Johnson holds the Lady Raider record for career kills, season kills, and kills in a match, and joins a South Dakota team that will only have one senior on the roster, offering the opportunity for immediate playing time for the Sidney standout. She plans on studying Biology at the uni...