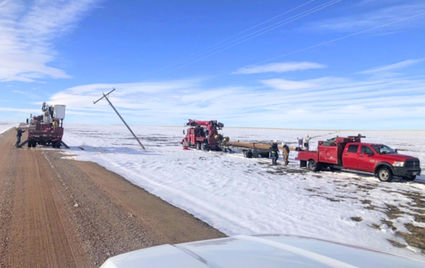 Utility companies have been busy the last few days replacing power poles and lines that were downed by the high winds and ice storm Friday and Saturday. Wheat Belt Public Power is expecting to have all of their customers reconnected today.

Friday the wind blew, and the snow fell, and the wind blew some more, and again, resulting in downed power lines and closed highways.

As of Monday morning, Wheat Belt Public Power District was trying to restore more than 300 customers who had been without power. Wheat Belt line workers had already restored more than 200 power outages since Thanksgiving.

As of 5 p.m. Sunday, Dec. 1, Wheat Belt Public Power had reported additional crews from Dawson Public Power District and Midwest Electric Cooperative Cooperation were responding to assist Wheat Belt. Crews returned to work before dawn Monday. Wheat Belt generally adheres to the guide of one to two poles replaced her hour in good conditions. Under those conditions, a crew could replace 12 to 24 poles in a 12-hour day. Utility responders are also fixing cross-arms, insulators, trees and other issues, according to an announcement through social media.

The outages are attributed to ice accumulating on the lines, and the high winds.

Monday afternoon, Wheat Belt Chief Executive Officer Tim Lindahl said about 1,000 people were without power at the storm's height. Since Saturday, the number of households without power was about 300. He said Monday afternoon there were about 80 to 90 poles left to replace. He added the wind and ice created a "perfect storm."

"We had ice nearly the size of pop cans on some of our lines," he said.

He said the extra weight and the wind contributed to the downed power lines.

"We still have some outlying issues," he said Monday afternoon.

Lindahl said most of the remaining Wheat Belt outages are in the Dalton and Gurley area. He said they expect to have power restored by today (Wednesday). He added crews will need to return and permanently fix some of the broken power lines.

During the storm, law enforcement were busy with road conditions and road closures. The Nebraska State Patrol also held its annual "Click It or Ticket," campaign.

Col. Bolduc urges winter drivers to check road conditions before embarking on the trip, and to keep a winter weather survival kit in the vehicle at all times, including a first aid kit, phone charger, ice scraper and shovel, flight with extra batteries, blankets or sleeping bags bottled water and high energy snacks.