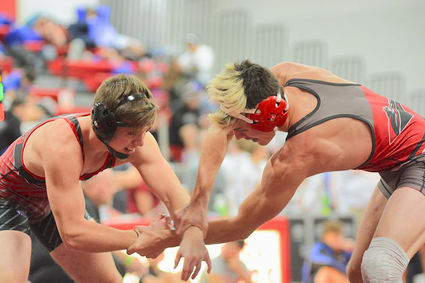 Sidney senior Paul Houser squares off during the Cozad Invitational on Saturday.

Sidney's Red Raider Wrestling team opened the 2019-20 season over the weekend with a dual meet win against Gothenburg, then placing five out of six varsity wrestlers at the Cozad Invitational on Saturday.

Sidney head coach Beau McConnell was pleased with the Red Raider's start. At Gothenburg, he said, "Some of our underclassmen stepped up into the varsity lineup and made an instant impact while our returning state qualifiers finished the job with four straight pins to seal the win for us at 51-25."

Sidney's performance against the Swedes carried over into the 16 team Cozad Invite, with fres...