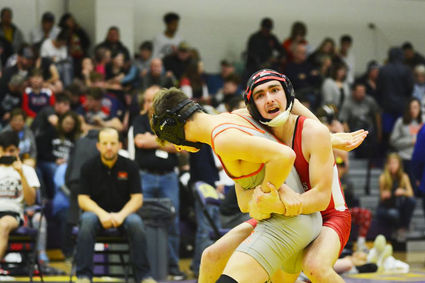 Sidney senior Jacob Peckham battles during the Sidney/Bridgeport Invitational on Dec. 21. He earned his 100th win of his career en route to winning the 132lb class at the tournament.

Sidney's Red Raider Wrestling team faced some tough competition at the Sidney/Bridgeport Invite on Saturday Dec. 21 in Bridgeport, and with a total of 151 points earned fifth place in a field of 16 teams.

Gering dominated the scoring with 231 points to earn top honors, followed by Ogallala with 180.5 and Bridgeport with 174.5.

Sidney had two individual champions in senior Jacob Peckham at 132lbs and Hayden Hofrock at 285lbs.

Peckham earned his 100th win of his high school career during the tournament.

The Red Raiders return from the holiday break with a road trip to Ogallala, where they f...