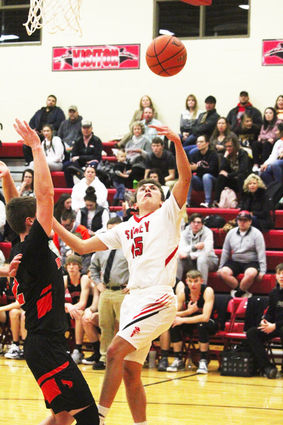 Sidney senior Skylar Heineman battles for two points against Burns, Wyo., in the first round of the Cabela's Holiday Shootout. Sidney won in overtime for their first victory of the year.

Sidney's Red Raider boy's basketball team finally broke into the win column on Monday Dec. 30 with a first round overtime victory over the Burns Broncs at the Cabela's Holiday Shootout.

With the tournament finally starting after a two day snow delay, the Red Raiders faced the visiting Burns squad in the first round, and senior Eli Ahrens made his season debut in limited action coming off an ankle injury.

Senior Skylar Heineman set the pace for the Red Raiders, pulling Sidney out to an early 7-to-2 lead after hitting a three point shot. The first quarter was a physical and low scoring affa...