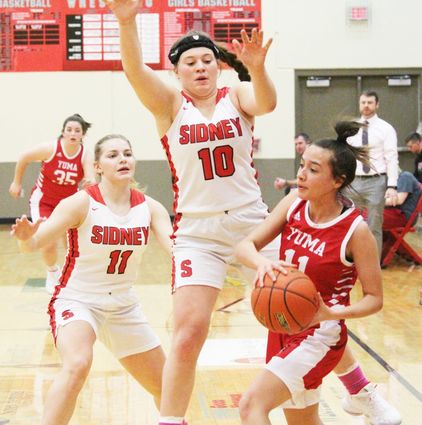 Sidney seniors MJ Johnstone (right) and Nicole Birner (left) set a trap as the Lady Raider's high-powered defense shut down the Yuma offense in Sidney's win over the Lady Indians Saturday in Sidney.

After a grueling three game stretch last week, the Lady Raiders had a full week off, finally playing again on Saturday against the Lady Indians of Yuma, Colo. Sidney hosted the afternoon contest against a patient Yuma team that played tight defense. Not many shots were taken by other side in a low scoring start that had Sidney ahead 6-to-2 at the end of the first period. At the period break, Sidney Head Coach Tyler Shaw made some adjustments that had the Lady Raiders build up a 22-to-8 lead at the end of the first half. The Sidney defensive pressure was relentless in the second quarter and...