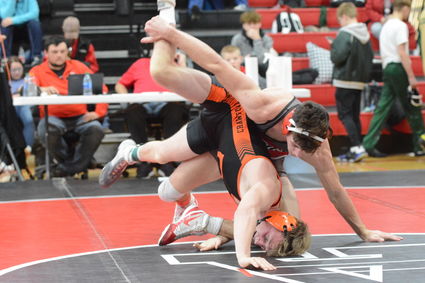 Sidney's Red Raider Wrestling had three competitions in a row last week, starting off with a dualmeet against Alliance on Thursday at Sidney High School. Te Red Raiders opened an early lead with pins by Austin Munier, Julian Maytorena and Jacob Peckham, along with a win by decision by Jordan Ruiz.

Alliance fought back with with a few pins and a win by decision of their own, but Sidney had built an insurmountable lead and after Hayden Hofrock won by pin at 285, the Red Raiders secured the dual meet victory 52-to-26.

The Raiders then traveled to Valentine on Friday, and the Class C1 Badgers handed the visiting Sidney squad a 52-to-18 dual meet loss.

Sidney Head Coach Beau McConnell said, "Our guys came out fired up for the home crowd on Thursday and won the dual handily 52-26, but On Friday against Valentine things did not go our way even though we wrestled tough in each match."

On Saturday Sidney traveled to compete in the Ainsworth Invitational and placed fourth overall in the team standings. Sidney had four wrestlers advance to the championship bout at the end of the day. Sophomores Jordan Ruiz and Dietrich Lecher won their divisons at 120 and and 182 pounds respectively, while Nathan and Hayden Hofrock placed second at 220lbs and 285lbs.

McConnell said, "In Ainsworth we competed against central and northern Nebraska schools as well as a couple programs from South Dakota and wrestled well. Overall it was a great effort with Hayden Hofrock getting his 100th win, Jordan Ruiz and Dietrich Lecher earning first place medals and the team placing 4th behind Burke SD, Valentine and Central City."

Sidney travels to Gering for a dual meet on Thursday, then finishes with the Southeast Tournament on Saturday.

1st Frank Even of Burke/Gregory

3rd Tucker Even of Burke/Gregory