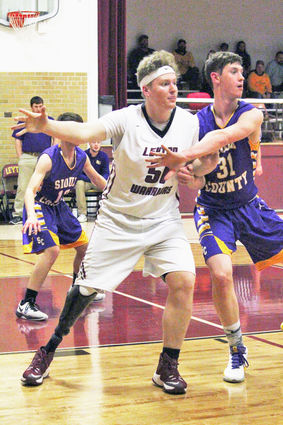 Leyton senior Drew Haley battles for position against Sioux County in recent action. The Dalton resident's goal of playing basketball in his senior season was successful due to his hard work and an outpouring of support from the community and national organizations.

Many people in the Cheyenne County area remember the story of how Dalton resident Drew Haley badly injured his knee in the Leyton Warrior Football Team's home opener at the end of August in 2018. The injury resulted in his right leg being amputated from the knee due to severe damage to the artery that feeds blood to the lower leg. From that point on, Drew and the entire Haley family have undergone a journey that they didn't seek, but in many ways has broadened and enriched their lives.

After the injury, the Haley family quickly learned that the entire community was there for support, and...