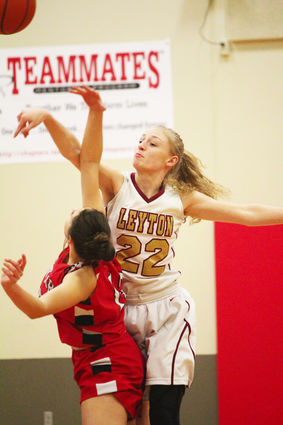 Leyton senior Madelyn Watchorn wins the opening tip-off during the Lady Warriors' 34-32 victory against Minatare in the D2-12 Subdistrict Championship game on Thursday.

Leyton's Lady Warrior Basketball team has had a solid if streaky season, going 12-and-8 prior to their second round D2-12 Subdistrict Tournament match up against Creek Valley at Sidney Middle School.

Leyton earned a bye, and then faced Creek Valley after they had defeated Potter-Dix in the first round.

Leyton had beaten Creek Valley by 20 points at home, and a change in venue did not help the Lady Storm's fortunes against Leyton as the Lady Warriors rocketed to a 27-to-2 halftime lead on their way to an easy 52-to-25 victory.

The victory advanced Leyton to the finals against a Minatare team they had beaten by three points on January 31.

The Minatare Lady Indians used pressure and speed to contain and disrupt the Lady Warriors offense, and the first quarter was a defensive battle with both teams unable to sustain any momentum.

After a 6-to-6 first quarter score, the battle continued through the second period, with Minatare senior Julissa Chariez burying a three pointer at the end of the half to give the Lady Indians a three point edge at the break, 15-to-12. The Lady Indians did a great job containing Madelyn Watchorn, forcing Draper and junior Sage Rummel and sophomore Cortney Holt to score to keep pace. Minatare took a four point lead into the fourth quarter, but the Lady Indians' defense started to falter, and Leyton slowly gained ground.

Although Minatare had kept Watchorn contained, she started to hit clutch shots and cut into the Lady Indian lead. In the final minute, Leyton was down by two but a four point swing from two consecutive Minatare turnovers gave the Lady Warriors a two point lead with time for one last possession for Minatare.

Leyton's defensive set forced an outside pass, and the Lady Indians could not get a clear shot and time expired, giving the Lady Warriors a 34-to-32 come from behind victory.

Watchorn led the Leyton scoring with 12 points in the win. Leyton advances to the D2-3 District Final against Mullen at 6p.m. Friday night at Ogalalla High School.