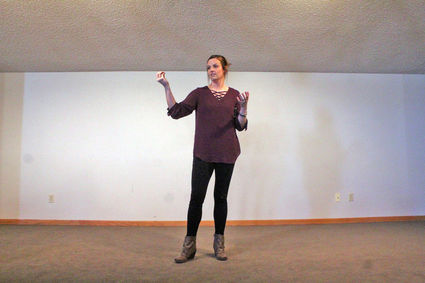 They take care of children, answer phones, design a fabulous meal. They also own small businesses and lead multi-million dollar companies. There are also those who do both.

A lunch served by Sam & Louie's Pizzeria was hosted at St. Patrick's Catholic Church with guest speakers. One of the guest speakers, Kayte Mollendor, shared her experience working in UST Global.

"One of the questions I try to ask is 'How are you?'" she said to the room full of women staff.

She said the answer often comes back "fine, but..." The two-word response is frequently followed by the long list of responsibilities that come with care giving and providing the needs of others. She encouraged women to take time every day to do what they like to do. She talked about one of her days when nothing went right, from the spilled coffee at home until arriving at work. She stressed the importance of having friends and co-workers to depend on.

"On top of everything else we have, we need each other," she said. "It's important to know your neighbor."

She said the importance of friendships at a job sometimes outpaces the job itself. She said some people won't leave a job because they have a friend on staff.

"I just appreciate everything you guys bring," she said.

Alfred Merritt, also of UST Global, commended the women in attendance for the work they do, saying how much is done before they leave the house in the morning.

The second guest speaker was Sidney Economic Development Director Melissa Norgard. She introduced herself as a Sidney native, born and raised in the community before working for a promotions company on the west coast where she struggled with a structure that didn't allow her to develop as a part of the company.

"Nobody thought I knew what I was doing," she said. "I felt defeated."

She said she kept going, never giving up.

"I kept telling these male-dominated companies there are other ways of doing things," she said.

She got married and she and her husband Stan moved back to Sidney where they both pursued careers in Cabela's. Then things changed, and she was encouraged to apply for the Economic Development Directorship.

"I've learned a lot personally and professionally over the last 20 years," she said. "If you're not satisfied with where you're at, make a change. You're the only one who can make yourself happy."