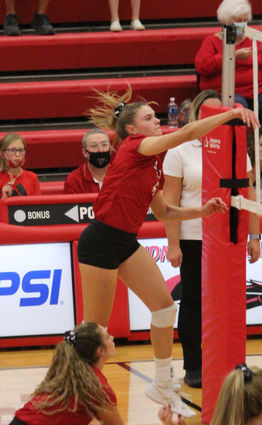 The girls regrouped and refocused and played much cleaner, and were able to take the next three sets 25-to-18, 25-to-22 and 25-to-16 for the 3-to-1 match victory and their 10th consecutive victory. Sidney outhit Chase County 46-to-23 led by 10 kills each by senior Karly Sylvester and junior Alecca Campbell. 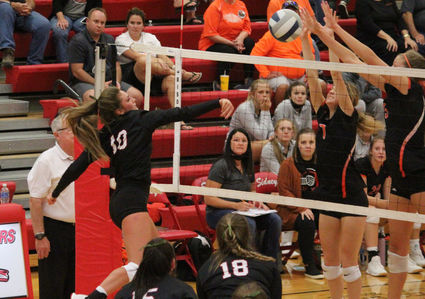 Next, the Lady Raiders hosted a Triangular on Thursday, and started off against Mitchell slowly again, and also had to deal with some burning popcorn setting off the high school fire alarm which caused a delay, and the Lady Raiders dropped the first set 23-to-25. But again, the girls regrouped and refocused and poured it on, taking the next two sets 25-to-14 and 25-to-21 for the 2-to-1 match victory, their 11th in a row. Sidney out hit Mitchell 29-to-17 and were again led by Sylvester and Campbell with eight kills each. Head Coach Julie Smith said, “Mitchell is a scrappy team, and when we fell behind we had to battle for the victory.”After Mitchell lost to Gering in straight sets, the Lady Raiders finished up the night by sweeping Gering 25-to-18 and 26-to-24 for the two set victory. Sidney outhit Gering 20-to-7 while Sylvester led the offense with eight kills.

Since senior outside hitter and best server Logan Holly has been sidelined with a shoulder injury with no scheduled date of return, the Lady Raiders bench has really picked up the serving duties, particularly senior Ireland Smelley who has been very effective with her serves. Smith said, “We have focused on serving since day one, and the girls’ confidence continues to grow in that area.”

With three more wins under their belts, the Lady Raiders traveled to Aurora on Saturday for tournament action, and went against some high-powered teams starting off with the Columbus Lakeview Lady Vikings. Sidney struggled against a tough team dropping both sets 25-to-9 and 25-to-11, and showed the Lady Raiders needed to work on their communication and eliminating errors. Sidney fared better but could not pull out the match victory against Bennington, falling in straight sets 25-to-19 and 25-to-23. Sidney was able to pull out a win against Crete 25-to-14 and 25-to-22 for the 2-to-0 match victory.

Sidney looks to continue their winning ways with a rematch against Scottsbluff scheduled for Tuesday at home, then they travel for the Twin Cities Tournament on Friday and Saturday.