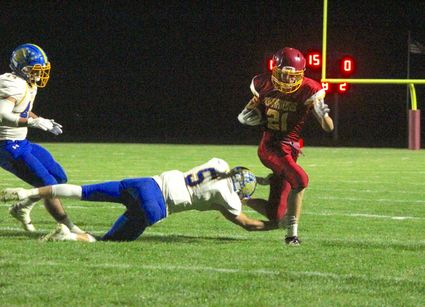 Leyton’s Warrior Football team capped Homecoming Week in Dalton with a dominating 47-to-12 victory over the Morrill Lions Friday night.

After a slow start by both offenses, Leyton put up the first points when the Lions were backed up to their own one yard line on 4th down and their punter stepped on the back end zone line to give the Warriors a safety and a 2-to-0 lead. Leyton got the ball back in great field position and quickly marched down the field and scored on a touchdown run by junior Kole Bush.  Morrill then started to drive, but gave the ball back on a fumble. On Leyton’s first play, senior Dominick Russ caught a short pass and broke out, then cut back and raced about 60 yards for another touchdown and the Warriors were up 16-to-0, and the first quarter was over.

Morrill was again pushed back and forced to punt deep in their own territory, and when Leyton took over, a great catch of a screen pass by Bush brought the Warriors into scoring position. Junior quarterback Scout Gamble then passed to junior Mason Reimers who then ran 20 yards nearly untouched into the end zone to increase the lead to 22-to-0, effectively ending the game early in the second quarter.

Morrill was finally able to score, but Leyton scored again to take a 28-to-6 lead into the half. The Warriors gave up a touchdown in the third quarter but then shutout the Lions in the fourth on their way to the 47-to-12 victory. Gamble was effective all night long, completing 11 of 25 passes for 186 yards and four touchdowns. Bush rushed 16 times for 87 yards and a touchdown and caught four passes for 66 yards and two touchdowns. Leyton hosts the 3-and-3 Hitchcock County Falcons Friday night at 7 p.m.