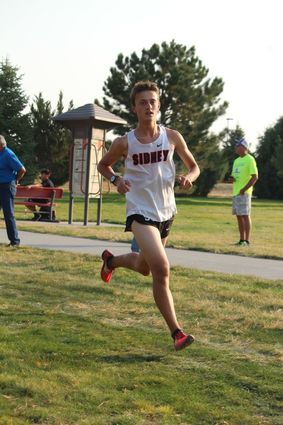 Sidney’s Red Raider Cross Country teams both qualified for the NSAA Cross Country Championships, the first time in five years both teams are headed to states.

For the boys, it is their third consecutive district championship and seventh consecutive year they have qualified for the State Meet. The State Meet will be held at Kearney Country Club on October 23.

The cool weather with gusting winds and a few rain showers made the run even tougher on the teams, but junior Daniel Bashtovoi turned up the intensity and won the individual championship with a time of 16:33.

Head Coach Donna Wiedeburg had her teams well-prepared for the course, with practices that simulated the the Crandall Creek Golf Course that focused her runners for the meet.

For the girls, freshman Talissa Tanquary again had an outstanding run, placing second with a time of 19:47.

The boys team finished first with 32 points, followed by Broken Bow and Gothenburg.

The girls team finished third with a score of 40, behind first place Ogallala and second place Chadron.