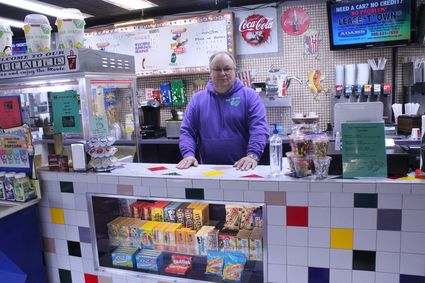 In any given town, there are attractions that draw people, social cathedrals in a sense, that people value as part of the community's identity.

In many towns, especially smaller communities, theaters fall within that definition of cathedral. There is the anticipated release of a new movie. Historically, theaters started as a venue for stage performances, then the black-and-white reels.

Along the way children saved their allowances for the night out; the five cents that a generation later turned to $5. But the smell of hot popcorn and a sugary drink remain.

What is new, at least in Cheyenne County, is for businesses to come together in support of the community's social cathedral.

“How all this came about— we had some businesses come to us, 'we know you're struggling, like every other theater,'” John Phillips said Thursday.

Businesses have come to Phillips and his wife Kim offering to sponsor a movie. The sponsoring business pays for the cost of the movie — people can attend free — and the only cost is the sweets at the concession stand.

“It's been a blessing,” he said. “We've just been sinking or swimming.”

The Phillips don't see themselves as different from other businesses in Cheyenne County and the Panhandle. They are struggling to keep their business open. For Sidney businesses, the rollercoaster ride of watching Cabela's transition to Bass Pro, businesses start to move to Sidney and then the coronavirus is announced, has caused stress and uncertainty. What can also be said, according to Phillips, is they can take care of each other.

“Sidney people — they're awesome,” he said. “They try to take care of each other.”

John Phillips has been operating the Fox Theater in Sidney for 33 years.

“I was here when the VHS tapes became a big thing,” he says.

He remembers how the VHS tapes impacted theater attendance, and then later the cable channels and subscription movie channels. The cable movie channels have become so expensive some people would rather attend a theater again, he said. In addition to the cost, they don't have to worry about cleanup, or be distracted by other duties at home.

The challenge now is the same as other industries, interruptions in the supply line largely a result of COVID-19 restrictions. Movies that are produced are not always available in a timely manner.

Locally, the fear of the COVID-19 virus is not as debilitating as in other areas.

“I don't think the fear is as much [of an issue] as the lack of product,” Phillips said.

The restrictions imposed in reaction to the COVID-19 virus have impacted the Fox Theater as it has other businesses.

“It's been tough with COVID,” Phillips said.

With theaters at a maximum of 50 percent capacity, the crowd in each theater is sparse, about 200 people total. The question then comes of what motivates him to turn on the lights each night. He said after 33 years, and more than 40 altogether, “what else you going to do?”

“In all honesty, I just love Sidney,” he said.

He does feel there is a lot of support for the theater in Sidney. He sees multi-generational viewers, parents who were child viewers now bringing their children to shows.

“I've got help that comes back and brings their kids,” he said.

The hope is the COVID-19 virus will pass and communities can return to normal. He said his buyer is expecting things to change in November-December.