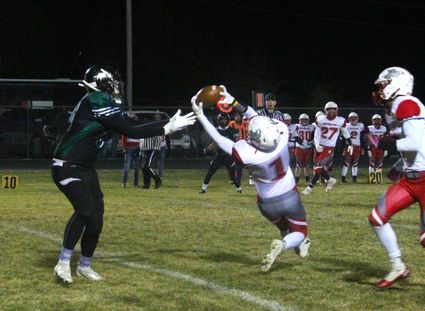 Potter-Dix junior Jared Anton reels in an interception to stop an early Storm drive on Friday in Chappell.

The Potter-Dix Coyotes ended their undefeated regular season in a spectacular fashion, dominating the Creek Valley Storm in Chappell 66-to-13 in a one-sided game that proved the Coyotes were not only for real, but a class above their D6 rivals.

The win earned the 8-and-0 Coyotes the D6-6 Title and a first round home game in the D6 playoffs starting Friday.

The temperatures dipped into the high 20's but the wind never picked up, and the cold temperatures seemed to not affect the red-hot Coyotes' team at all. Creek Valley started the game on offense, and after being shut down, attempted a punt that was mishandled and fumbled, and the Coyotes took over on the Storm 10 yard line. A misdirection run by senior Javon Coyle ended in a touchdown, and the Coyotes were up 6-to-0 early.

Potter-Dix's swarming defense shutdown the next Creek Valley possession, forcing a punt to midfield. The Storm's defense held the Coyotes, forcing a fourth down and 25 yard conversion attempt, but sophomore quarterback Luke Kasten was able to scramble away from the Storm defense and hurled a long bomb to the back of the end zone to freshman Braydon Kasten, and after a successful point after the Coyotes were up 14-to-0.

Creek Valley was finally able to move the ball on their next possession, converting a touchdown on a fourth down pass from junior quarterback Eli Schmid to senior Justin Ningen to cut the Potter-Dix lead to 14-to-6. But Brayden Kasten received the ensuing kickoff and scrambled 75 yards all the way for another touchdown to move the score to 22-to-6.

The next few series cemented the Potter-Dix effort, and put any doubt of the outcome away. After a few good runs put the Storm in Potter-Dix territory, Schmid tried to connect with junior tight end Drew Fraas near the end zone, but Potter-Dix junior Jared Anton made a spectacular twisting interception to stop the Storm drive.

Potter-Dix senior Donnie Moench had a big run from deep in Coyote territory to the Creek Valley 29 yard line, but on the next play Potter-Dix turned the ball over on a fumble. Creek Valley was not able to capitalize on their good fortune, and again their normally reliable kicking game failed with another bad snap, giving the Coyotes a short field, and another quick touchdown when Coyle caught a Kasten pass to move the score to 30-to-6.

On the next series, Storm junior running back Lucas Trujillo fumbled on a sweep, and the ball was scooped up by Potter-Dix junior Conner Glanz and returned for another touchdown, widening the Coyotes lead to 38-to-6. This was followed by Luke Kasten scrambling on fourth down for another touchdown, and a 35 yard interception return by Coyle for a touchdown The Coyotes then led 52-to-6 at halftime on their way to a 66-to-13 victory.

The Potter-Dix defense was just too fast for the Storm, with Glanz pressuring and harassing Schmid all night while Kasten, Coyle and Anton came up with big stops to shut down the Creek Valley offense.

After the game, Creek Valley Head Coach Joe Kupper said, "Potter-Dix is a very good team. They played fast and they played well. As for us, I feel like this is the worst that we have played since our seniors were freshman. I felt confident going into the game, but it became apparent that I had not done enough to mentally prepare our guys for the team they were facing."

Both teams qualify for the playoffs, and both teams will have a home game. Creek Valley hosts 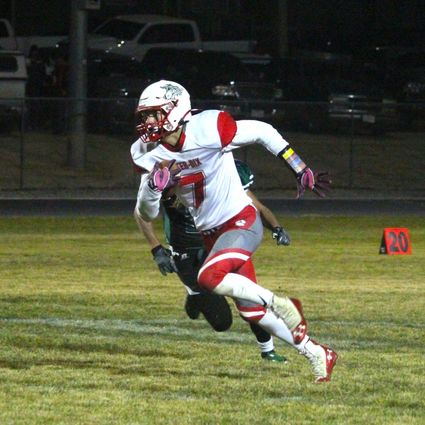 Potter-Dix sophomore quarterback Luke Kasten pulls the ball down and scrambles for a touchdown during the Coyotes' win over the Storm.

Spalding Academy Friday night, a team they've never faced, coming into the contest with a 7-and-1 record. Kupper is looking forward to their game on Friday, saying, "We are excited to host Spalding Academy. We saw them at camp in Harvard this summer, and they are a quality opponent. They are smaller, but they are fast and scrappy. Jacob Diessner is a tremendously good running back. We are expecting a good game."

Potter-Dix hosts the Wallace Wolves Friday night, a 2-and-4 team they beat in their first game of the season 36-to-31. Frerichs said, "We played then first game of the year in a close five point game. Looking forward to the opportunity and excited to see how far we can advance."

With the Coyotes firing on all cylinders now, look for the game to not be as close as their early season match up.