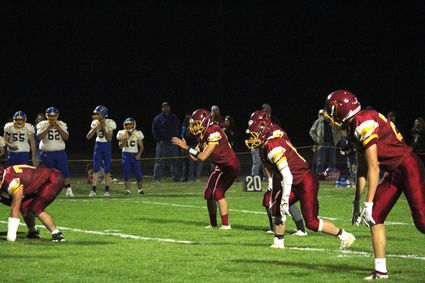 The Leyton Warrior Football team made the long drive to Loomis for the first round of the D2-8 Man NSAA Playoffs Thursday afternoon, and came up short against a Loomis Wolves team that was able to run the ball at will against the Warriors’ defense in cold and windy conditions, ending the Leyton squad’s season with a 56-to-16 defeat.

Both teams had impressive turnarounds from their previous seasons when they both ended with 1-and-7 marks, with Leyton ripping off five wins in a row to start their season before a slew of injuries and stronger teams had the Warriors end their regular season with three straight losses. Loomis turned their fortunes around this year with a 7-and-1 regular season record, powered by an explosive running game featuring speed at quarterback, fullback and running back.

The game started with cold gusting winds bringing the temperature down into the mid-20’s, meaning both teams knew they would have trouble moving the ball in the air, and the Wolves received the ball first and immediately got their running game in gear. A heavy dose of running by Loomis senior Carson Orcutt kept the ball moving while tallying first downs for the Wolves. A long 12 play drive that took nearly five minutes off the clock ended with a five yard touchdown run up the middle by senior John Kenney followed by a successful point after for two put the Wolves up 8-to-0.

Leyton started on their 23 yard line, and were only able to manage seven yards on three ruses, forcing a punt on their first possession. Senior Zack Henke got off a good punt, putting the Wolves back to their own 25 yard line to start their second possession. This time, Orcutt, Kenney and senior quarterback Aiden Lovitt shared the running duties and again marched down the field. On the Warriors’ 21 yard line, Lovitt kept the ball on an option play, and followed his blocking running backs around the end and went the distance for the touchdown, bringing the score to 14-to-0 after a failed point after attempt.

Leyton junior standout running back Kole Bush returned from a serious knee injury to carry the ball, and was able to gain a first down on his first carry, but the Wolves defense stiffened and shut down the Warriors’ drive, forcing another punt by Henke. On first down, the Wolves surprised the Warriors with a pass over the middle, but sophomore Clay Meyer was unable to reel in the pass which would have resulted in an easy Loomis touchdown. Again the Wolves kept the ball on the ground, and Lovitt exploded up the middle for 26 yards to again put Loomis in scoring position. After having a touchdown called back by a holding penalty, Loomis again moved closer, and Lovitt scored on a keeper around the end to push the score to 20-to-0. Leyton again could not gain a first down and punted the ball away on fourth down. Loomis took over and again tried the same pass play over the middle, and again Lovitt and Meyer could not connect on a pass that would have went for an easy touchdown. Leyton was able to force a third down and ten, but Loomis pulled off a screen pass to Orcutt that gained 12 yards and a first down. Loomis continued until the drive ended with a 32 yard pass and catch for a touchdown by Kenney, and the Wolves opened up a dominating 28-to-0 lead.

Another three and out by Leyton gave the Wolves the ball back with enough time in the half for another drive. This time, Kenney was able to break through the middle and beat the secondary 65 yards for another touchdown, giving the Wolves a 36-to-0 lead and the Warriors now had to deal with a running clock. At halftime, the Warriors’ inability to move the ball was highlighted by their 15 total yards of offense on only 13 plays in the entire half. Leyton started the second half with the ball, but on a third down and 13, junior quarterback Scout Gamble was stripped-sacked at the Leyton five yard line, and Loomis’ Clay Meyer took the ball across the end zone for another score to move the lead to 44-to-0.

Leyton was able to spark a rally after that score, with Gamble connecting with junior Mason Reimers on a 65 yard catch and run for a touchdown, then a 28 yard Gamble to sophomore Justin Ernest touchdown to stop the running clock and narrow the score at 44-to-16, but the Wolves fired back after a Leyton fumble deep in their own territory with a Lovitt touchdown run to move the score to 56-to-16, enacting the running clock again, and time slipped away on the Warriors’ season. The game ended with a final score of 56-to-16, with the Warriors only managing 131 total yards, 21 rushing to the Wolves’ 327 yards, with 278 earned on the ground. The Warriors end their season with a 5-and-4 mark.