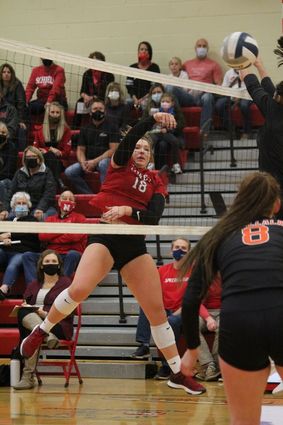 The Sidney Lady Raider Volleyball team ended its season Saturday afternoon with a loss to the Syracuse Lady Rockets three sets to two at Kearney High School. Sidney finishes with a 24-7 record.

After losing in straight sets in the C1-12 Subdistrict finals to Ogallala, the Lady Raiders faced a District Final opponent in Syracuse that boasted a 21-and-1 season record, dropping only two sets the entire year during their lone loss to Douglas County West in early September. Sidney had never faced Syracuse, and had to rely on film to familiarize themselves with the free swinging, speedy Lady Rockets squad.

The first set started with Syracuse opening a 10-to-4 lead with strong aggressive serving repeatedly getting the Sidney squad out of system.  Led by the big swings of senior Karly Sylvester, Sidney climbed back to narrow the Syracuse lead to 16-to-14.

Syracuse took a time out, and went on an eight point run, with their strong serves keeping Sidney out of system and causing communication errors. The Lady Rockets took the first set 25-to-16, and it seemed the Lady Raiders were having difficulty matching the speed of the Syracuse attack.

The second set opened with Syracuse sprinting to a 9-to-2 lead, prompting a Sidney timeout. The pause did not help as the Lady Raiders could not execute and committed repeated unforced errors. Syracuse continued with their aggressive serving, keeping Sidney off balance and pulled away with a 25-to-10 second set victory that was not as close as the final score indicated. The Lady Raiders had no service points in the set, and only served three times — all serve errors.

Any thought of the Lady Raiders folding were quickly dispelled when Sylvester stepped up and kept the Lady Raiders in the third set, pulling Sidney to an early 6-to-3 lead. Syracuse battled back and went ahead, but Sidney hung tough and at 11-to-12, the Lady Rockets committed their first service error, while struggling in that category all year due to their agressive serving. Syracuse played less aggressively in the third set, and Sidney took advantage with drop shots into empty zones while the Lady Rockets’ offense went cold. Sidney took the lead at 18-to-17 , and pulled away for the 25-to-21 third set victory.

The fourth set opened with Sidney opening a quick 4-to-0 lead, prompting a timeout by Syracuse, a team that had not lost a set since September 5. Syracuse tried to come back but the Lady Raiders played fast and confidently, with clutch kills by junior Alecca Campbell and Sylvester. Syracuse looked flat and out of synch, trailing by as much as seven points, until they started to rally. But Sidney was able to fend off the charge and took the fourth set 25-to-18, and a fifth set to 15 would settle the match.

The Lady Rockets huddled to regain their composure and focus on stopping the Lady Raders’ momentum while the Sidney side was fired up and ready to cap their comeback. The fifth set with Syracuse getting the first point on a senior Jessie Moss’ 1000 kill of her high school career. The match was tied at 3-2-3 when Sylvester smashed a big kill. After that, however, Syracuse went on a run, prompting Sidney to take a time-out. The Lady Rockets continued to score, prompting another Sidney time-out. But the Lady Raiders could not stop the Syracuse momentum and lost the final set 15-8. Sylvester had an outstanding match, leading the Lady Raiders with 19 kills.

After the match, Sidney Head Coach Julie Smith said, “We were forced to start our day with creating a new lineup. The girls did a great job embracing and adjusting to the adversity that was thrown at them before we left Sidney; however, we recognized that we needed to make additional adjustments during the 2nd set.”

The Sidney squad had to deal with injuries and loss of key players throughout a challenging season. Smith said, “Our Lady Raiders showed tremendous grit and determination and can definitely hold their heads high. Successful seasons are often based on the win/loss record, but ours was successful because of so many additional reasons.  Obviously, the varsity finishing up with a 24-7 record, District Runner-up, and Conference Champions are highlights for our varsity season, but we have had so many more successes throughout.

Sidney’s Lady Raider Volleyball team had to wait a day due to snow to start their Subdistrict tournament, and on Tuesday the Sidney squad had no trouble powering past the Mitchell Lady Tigers to earn their place in the championship match on Wednesday.

Tuesday’s match against Mitchell started with Sidney breaking out to a 5-to-1 lead in the first set as the Lady Tigers tried to claw their way back into the set. But the Lady Raiders played fast and disciplined, covering the court well and allowing Mitchell very few kills as they opened an 11-to-5 lead, then an 18-to-10 lead. The first set ended in a 25-to-14 Sidney victory.

Sidney actually fell behind to start the second set, but tied it up at 4-to-4 when junior Alecca Campbell smashed a kill that hit a Mitchell defender and flew into the stands. Mitchell responded with a big spike of their own that flew off into the crowd to re-take the lead at 5-to-4. But Sidney went on a run, highlighted by seniors Reagan Biesecker and Emma Wintholz throwing up a block of Mitchell sophomore Caani Banks’ spike that opened a two point lead for the Lady Raiders. Sidney started mixing spikes and drop shots to score and went on a run and opened an 11-to-5 lead. Mitchell was able to narrow the deficit a bit, but the Lady Raiders started to pour it on at 15-to-11, led by multiple big kills by Campbell, ending the set with a 25-to-15 Sidney victory.

In the third set, Sidney opened a lead only to have Mitchell fight back to tie the set at 5-to-5. Mitchell then went on a run and opened a lead until Sidney came back to tie the set at 13-to-13 on a Campbell kill. Sidney senior standout Karly Sylvester then went on an eight point service run, including two ace serves, to put Sidney in command at 21-to-13. The Lady Raiders closed out the set with a 25-to-18 victory for the 3-to-0 match victory. Alecca Campbell led the offense with 12 kills in the match, and sidney outhit Mitchell 30-to-13 in the victory.

This set up the championship game on Wednesday, after Ogallala dispatched Chadron Tuesday night in straight sets, 3-to-0. The two rivals had met twice before this season, and split against each other with Sidney defeating Ogallala early in the season while Ogallala returned the favor in the beginning of October. The 23-and-10 Ogallala squad was seeded second to the 24-and-5 number one seeded Lady Raiders’ squad, but both teams knew this matchup would be a tremendous test on both teams’ abilities. The Lady Indians brought a large and raucous cheering section with them for the title match, and both teams’ crowds traded chants and cheers throughout the contest.

Ogallala opened an early lead in the first set, maintaining a two or three point advantage until Sidney finally tied the match at 15-to-15. Ogallala then pulled away again, but a rash of service errors by the Lady Indians tied the score again at 18-to-18. Sidney started to pull away an opened a 22-to-20 lead, prompting an Ogallala time out.

After scoring another point, the Lady Raiders’ offense stalled, and the defense started to get caught flat-footed and out of position. The Lady Indians built momentum and scored the next five points in a row for the 25-to-23 first set victory, prompting the Ogallala fans to erupt in approval.

Sidney settled down and started the second set well with great shot placement, and opened a 3-to-0 lead when junior Brynna Ross placed a shot from mid-court perfectly into an empty space on the Ogallala backcourt. The Lady Indians bore down and started chipping away at the Sidney lead, eventually tying the score at 5-to-5. Sidney seemed to be getting caught out of position and offering up too many free balls to the Lady Indians, who took advantage and opened up a two point lead. Sidney battled back and junior Emilee Wieser delivered back-to-back kills to knot the set at 11-to-11.

The teams battled until they were again tied at 16-to-16. But Ogallala started to get the rolls off the net and the breaks they needed and started to pull away. The athletic Lady Indians then started to shut down Sidney’s net game, with their front line repeatedly blocking Sidney kill attempts. Sidney scrambled to cover their end of the court, but communications errors resulting in collisions between the defenders and a few mishits had the Lady Raiders falling further behind, and Ogallala pulled away for the 25-to-20 third set win, sweeping the Lady Raiders on their own court 3-to-0.

Sylvester and Campbell led the offense with 11 and nine kills respectively, while sophomore Rheagan Stanley did a great job with 13 digs in the back court. Ogallala outhit Sidney 37-to-31, led by senior Jenna Curtis’ 12 kills.

After the match, Sidney Head Coach Julie Smith noted that her squad had trouble making mental adjustments during the match, saying, “Yes, Ogallala did play well. They played well on defense and swung aggressively. We have had to adjust our lineup, but feel that the girls we have on the court are able to play at a higher level. Unfortunately, the mental aspect of volleyball had a greater impact last night than we would care to see.” 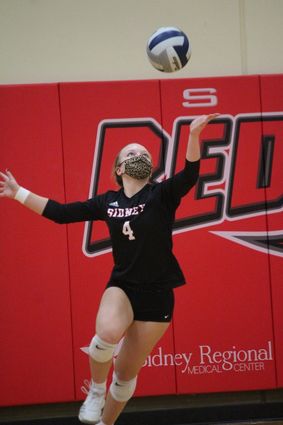