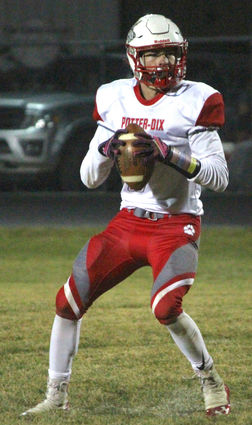 The Fall Sports season for 2020 was very successful, despite the challenges and restrictions of the COVID-19 pandemic. With the hard work and dedication of the coaches, activities directors and school administrators, almost all of the area's sports team were able to play full schedules, with some exceptions, which in itself counts as a winning season despite the actual team records. Here's a look back at some of the highlights:

The Coyote Football team had struggled mightily over the last decade, with wins few and far between. From lack of players, to injuries to key team members and just plain bad luck, it seemed the Coyotes could not catch a break despite the commitment of Head Coach Dale Frerichs, his staff and the players. But in 2020 things changed in a dramatic way, ending the season with a 9-and-1 record, and it started with a strong belief that the team could win.

“You can have a bunch of outstanding athletes on a team, but if they don't believe in themselves, and believe that they can win, not much will ever change. We saw a change in attitude this year, and the results were tremendous,” said Potter-Dix Activities Director Cory Michelman.

Starting the season with a six point win over Wallace, the Coyotes gained confidence and went on a tear, recording nine wins in a row in games that weren't even close, capped with a blow out win against rival Creek Valley in the regular season finale.

Sophomore sensation quarterback Luke Kasten, who had showed flashes of what he could do last year despite injuries, dominated offensively with his legs and his cannon-like arm. Transfer Javon Coyle was a huge contributor, making big plays on both offense and defense, while Donnie Moench and Jared Anton rounded out the explosive Coyote offense. The Coyotes made it all the way to the semi-final round of the state tournament before falling to Cody-Kilgore, but with their talent and depth, look for Potter-Dix to remain at the top of the D6 standings for at least the next few seasons.

Another team that had struggled for many years prior to turning their fortunes around, the Storm came off an historic 2019 campaign and built upon their successes, making another appearance in the playoffs.

A solid and well-coached team, the Storm featured big playmakers on both offense and defense, and made it to the semi-finals of the state tournament before falling to rival Arthur County and ending the season with a 7-and-3 record. The running back duo of Justin Ningen and Lucas Trujillo chewed up yardage on the ground, while Oakley Hodges grabbed passes and booted kickoffs for touchbacks.

Creek Valley is another program with talent and underclass depth to keep them very competitive for years to come.

The Leyton Warriors Football team made its first playoff appearance since 2015 on the strength of a five game win streak to start the season. Leyton started its season with a big road win against Maywood/Hayes Center at the end of August, and breezed through their schedule for the first five games, outscoring their opponents 261-to-78, until the injury and loss of their leading rusher Kole Bush and tougher competition coincided with a four game losing streak. Led by Scout Gamble at quarterback with 15 touchdown passes, Zack Henke with 12 touchdowns scored and Dominick Russ with 674 all-purpose yards, the Warriors gelled together and learned they could win games. The Warriors are set build upon their success this year, and is another team with the ability to remain competitive.

Sidney Cross Country Head Coach Donna Wiedeburg has built such a successful program over the last few years that it seems that a never ending stream of talent keeps on filling the roster spots of the the teams' successful graduating seniors, keeping the Red Raiders at the top of the C-5 District. The Sidney Boys' squad captured their third consecutive C-5 District Title and qualified for the State Meet for the seventh consecutive year. Juniors Daniel Bashtovoi and Mitch Deer anchored the boy's team, with Bashtovoi taking the individual District Title and Deer placing third.

Bashtovoi and Deer placed seventh and 35th at the State Meet respectively, and the Sidney team placed second at the competition. In the last three years, the Sidney boys' have earned a state title, a third place showing and a runner up finish.

For the Girls' squad, freshman phenom Talissa Tanquary had an outstanding season, placing second in the District Championships and had a 12th place finish at the State Meet. Junior Lydia Peters placed 18th at the State Meet, giving the Lady Raiders a seventh place finish overall. With Sidney's strong program feeding the team, look for the Red Raiders to remain at the top of their class for many years to come.

Sidney's Lady Raider Volleyball team welcomed Julie Smith, its' third Head Coach in as many years, but a switch in leadership did not make the Lady Raiders any less competitive. After a surprising loss to Scottsbluff in straight sets to open the season, the Lady Raiders adjusted and went on a tear, winning 12 matches in a row on their way to a 24-and-7 overall record. 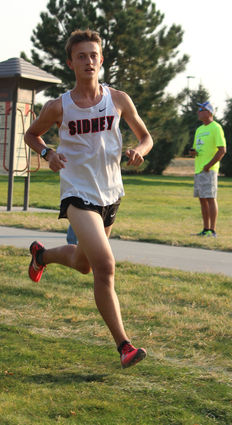 The Lady Raiders battled through COVID-19 problems, injuries and the loss of senior standout Logan Holly midway through the season, but kept battling to a District Title shot on the road after falling to Ogallala in the Subdistrict Championship game. The Lady Raiders made a thrilling comeback from a 0-to-2 deficit against the Syracuse Lady Rockets in the District Finals match to force a fifth set, but fell short to end their season.

Led by senior power-hitter Karly Sylvester, who ended her career with 621 kills and 86 blocks, the Lady Raiders learned new systems and played better as the year progressed. Again, this is another team with a strong program that keeps bringing up new talent, and with emerging standouts like junior Alecca Campbell who had 191 kills in 2020 returning next season, the Lady Raiders are again poised to be the team to beat in the West.