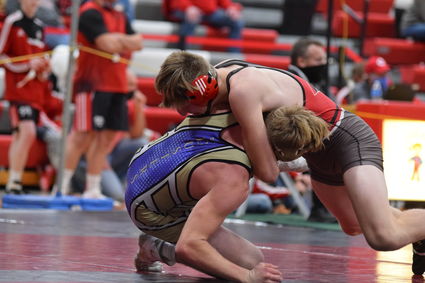 COVD-19 restrictions served up a curve ball, as their usual opening dual meet against Gothenburg was combined with the Cozad Invitational Tournament for this season.

Sidney had a tough schedule on Friday, with duals against five teams that resulted in a 3-and-2 record for the Red Raiders. The wrestling team had unique challenges prior to the season with COVID-19 precautions, from constant cleaning and temperature checks to keep the students safe.

“There is no social distancing in wrestling, so we need to be extremely careful and mindful of our safety,” Sidney Head Coach Beau McConnell stated prior to Friday’s action.

Sidney started off against McCook, and were edged out 34-to-33 with senior Brady Robb’s decision earning only 3 points to give McCook the edge. Sidney is light on wrestlers in the lower weight classes, and a string of forfeits put the Red Raiders in a points deficit they could not overcome.

Next up the Raiders battled against eventual tournament-winner Aurora, and again could not overcome their points deficit despite outstanding performances by freshman Chance Houser at 106 and Austin Munier at 126. Sidney closed out the tournament with three straight wins, taking down Adams Central by a score of 45-to-36, Holdrege by a score of 41-to-34 and Gothenburg with a final tally of 50-to-30. Chance Houser collected five victories in the tournament to start his high school career.

Sidney earned second place in the tournament, behind the first place Aurora team. It was a strong start to the season, and Sidney next travels for the two-day Charlie Lake Tournament in Cheyenne, Wyo., on Friday and Saturday.