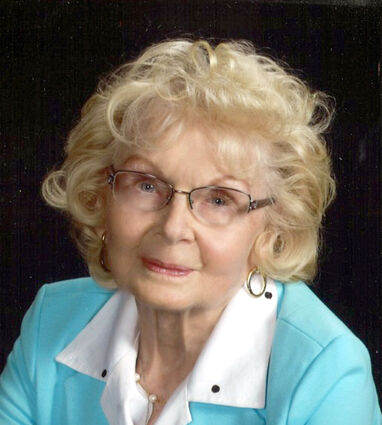 Esther Emma Elfriede Wittig Weber, 97, passed away peacefully on January 2, 2021. She was born May 14, 1923 in Sidney, Nebraska to Fred and Elfriede Wittig. She grew up a country girl on their farm south of Sidney with her two sisters, Irene and Elaine, and a brother Arnie. She graduated from Sidney High School in 1941 and worked at the American National Bank in town. It is here she met her future husband, Elmer Weber, who always brought his payroll check to her window. Esther and Elmer were married in Sidney on September 9, 1945. They had three children, Connie, Jerry and Tammi.

They lived in Sidney until the early ‘70’s when Elmer sold his business and they moved to Lincoln where she held various jobs. She worked as a real estate agent, a sales clerk at Ben Simons and Sears, where she was named Employee of the Year. Her last position was as an office assistant for Anne Johnson at Financial Network where she worked until her mid 90s.

Esther was always a people person and loved serving as a volunteer at Bryan Hospital for over 18 years, where she was recognized as one of their most beloved and devoted volunteers.

Esther was preceded in death by her husband Elmer, her parents, siblings Irene Smith, Elaine McNaught, Arnold Wittig and an infant brother Walter who died shortly after his birth in 1920.

As a Missouri Synod Lutheran, Esther always had a strong faith and believed that God’s angels protected her and her family her entire life.

Family was always very important to her. This past year was difficult for her while living at the Woodlands at Hillcrest assisted living facility being unable to personally see and be with those who she loved, and who loved her the most.

She lived a good, full life. We will miss her every day.

Condolences and “Hugs from Home” online at RoperandSons.com

Following the CDC COVID-19 guidelines, we will comply with social distancing seating and masks are required. We respectfully ask for your understanding and adherence to these guidelines.