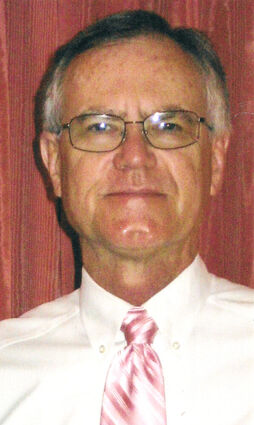 Richard Howard Jensen Sr. passed away at his home near Oshkosh, NE, on January 12, 2021. Rick was born on November 4, 1945, in Lewellen, NE. He wrote, “In November of 1945, I had the good fortune to be born the son of Howard and Doreen Jensen.” Howard was on a navy ship anchored in Tokyo harbor that day.

He attended Garden County High School, graduating in 1963. He was a talented baseball player and was the pitcher on the state championship team his senior year. His parents owned the Silver Hill Theatre, where he worked as a projectionist. In 1966, he married Sue Rhiley, his high school sweetheart. They were married for 54 years before Sue’s death in November 2020.

Rick attended the University of Nebraska Lincoln, playing trumpet in the University Marching Band. He was a lifelong Husker fan. He graduated in 1967 with a degree in special education and taught school for three years, two in Lincoln and one in Sidney. When daughter Jill was born, the family returned to Lincoln where Rick completed a law degree.

He began practicing law in January 1974. The first few years he served as the Deputy Keith County Attorney in Ogallala. In 1976, son Rick Jr. was born. Rick served several years as the Garden County Attorney and the Attorney for the Village of Lewellen. After leaving those offices, the bulk of his court work was as a criminal defense attorney.

In 1992, the State v. Ryland case took him before the Nebraska Supreme Court. He argued that there was no probable cause to stop the defendant’s car, leading to an illegal search and seizure per the Fourth Amendment, and the court agreed, with a 5-2 decision.

His office, which he shared with his brother, Dr. Tim Jensen, was a fixture on Main Street for 46 years until his retirement in November 2020.

During his career, Rick represented more than a hundred families in the Panhandle as guardian ad litem, arguing for the interests of the children. Except for raising his own kids, that work is his most important and most lasting legacy.

Rick’s greatest joy was his family, and he was so pleased to be granddaughter Athena’s “Papa,” the Jensen endearment for granddad. Rick rescued many orphaned cats and kittens over the years, and he and Sue gave them a home in the country.

Rick became a pilot in 1966, and he fell in love with flying. His longest flight was to the Caicos Islands, with his father-in-law King Rhiley and brother-in-law Joe Rhiley. In 1978, Rick was flying a Piper Arrow 200 from Lubbock, TX, to Oshkosh, with King as copilot and friend Steve Eaton, when an engine failed near Ogallala. Rick crash-landed in a farm field. All three walked away. Rick later owned a Cessna 182.

Cremation has taken place. A celebration of life for both Rick and Sue is planned for the summer of 2021. Memorials for St. Mark’s Lutheran Church in Oshkosh may be sent to the Jensen family at PO Box 75, Oshkosh, NE 69154.

Holechek-Bondegard Funeral Home and Cremations in Oshkosh is serving the Jensen family.