Storm Settles for 4th in MAC 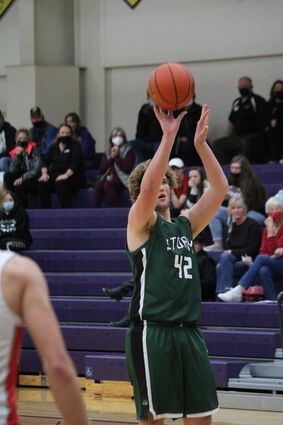 Creek Valley’s Storm Basketball Team continued to struggle for wins, placing fourth overall at the MAC Tournament in Bridgeport over the past week. The Storm started the tournament as the number five seed and had a big win in their first game against number four seed south Platte Blue Knights.

Creek Valley was able to match the Blue Knight’s scoring in the first quarter of their game, and pulled out a two point lead at the end of the first quarter. The Storm put additional distance between themselves and South Platte with a big 19-to-12 second quarter to give them a 33-to-24 halftime lead. Both teams scored well in the third quarter with South Platte trimming three points of the Creek Valley lead, but great defense on both sides slowed the scoring pace in the fourth quarter and the Storm was able to hang on for a four point 68-to-64 upset win. Senior Patrick Ningen had a fantastic game, leading all scorers with 30 points with five three point hits in the win. The victory matched Creek Valley against number one seed Potter-Dix in the semi-final game on Friday.

Potter-Dix used their speed and four three point hits to open a five point lead in the first quarter, and then the Storm tried to keep pace in the second period. Potter-Dix led 36-to-27 at the half, and Creek Valley senior Oakley Hodges was already in foul trouble. Potter-Dix pulled away in the third quarter, then a 22 point fourth quarter sealed the victory for the Coyotes. Hodges led the scoring for Creek Valley with 16 points, despite fouling out in the third quarter.

Creek Valley then faced off against Leyton in the consolation game on Saturday, and a low scoring first quarter had the teams within one point of each other. Leyton started to pull away in the second quarter and then a 15-to-5 third period gave the Warriors a 38-to-20 lead going into the fourth quarter. Creek Valley fought back hard with an 18 point fourth quarter, but it was not enough to close the gap and the Storm fell by a final score of 49-to-38 to earn fourth place in the tournament. Sophomore Hunter Martinez led the Storm scoring with eight points in the loss. Creek Valley’s record moved to 2-and-11 on the season and they were scheduled to host the 2-and-11 Sutherland Sailors on Tuesday.