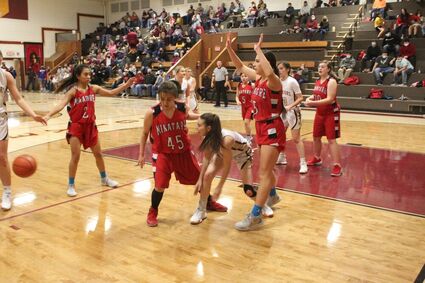 Leyton’s Warrior Basketball teams faced off against the Hemingford Bobcats and then the Minatare Indians with very different results for the teams. On Thursday the Leyton teams traveled to Hemingford, and the girls’ game started as a tight defensive contest, with the score knotted at 11-to-11 after the end of the first quarter. But the Lady Bobcats turned up the defensive pressure and got their offense in gear, putting up 23 points in the second period while holding the Lady Warriors to just three points to take a commanding 34-to-14 lead at the half. Hemingford continued to outscore Leyton in the third quarter, and although the Lady Warriors fought hard to come back in the final period, the deficit was too big and Leyton fell by a final score of 62-to-40

The boy’s contest started as a tough defensive battle, and the scores became few and far between as the teams went into the halftime break knotted at 13-to-13. The tight defense and turnovers continued through the second half, and the Bobcats one point lead at the end of the third quarter held up, and Hemingford hung in to take the 31-to-30 victory. Leyton junior KJ Bush led the scoring for the Warriors with eight points, while the Warriors’ defense forced 11 steals and 19 turnovers in the loss.

On Friday, the Minatare Indians traveled to Dalton, and the girls’ matchup featured a tremendous defensive effort by the Leyton six as they shut down the Lady Indians in the second half, only allowing six points in the final two periods to cruise to a 62-to-26 victory. Three of Leyton’s six players scored in double digits, led by senior Ella Draper with 19 points, followed by senior Sage Rummel with 17 and freshman Claire Watchorn with 16. All six players had at least two points in the win. The boys’ team also notched a stellar defensive effort and had their highest-scoring game of the season as they pumped in 76 points while shutting down the Indians offense from the field in the second half. The 76-to-37 victory featured Leyton sophomore Justin Ernest leading the scoring with 21 points. The Leyton teams were scheduled to travel to Julesberg on Tuesday to match up against Sedgwick County.