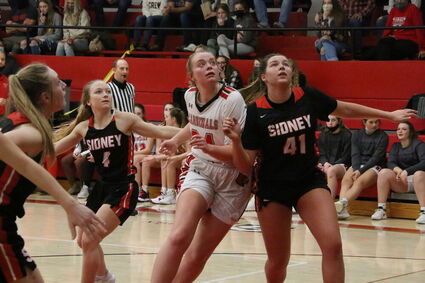 Sidney’s Lady Raider Basketball team only had one game this last week, a road contest against Chadron Friday night where the Lady Cardinals were able to build a late lead and hold off a Lady raider surge to take the victory 54-to-46. The loss drops Sidney’s record to 13-and-5 for the season with critical home contests against Gering, Scottsbluff and Alliance coming up over the next week.

Chadron took an early lead in the first quarter, but Sidney, sparked by two three point hits by freshman Katie Ramsey, came back to knot the score and build an eight-point, 26-to-18 lead at the half. However, Chadron came out of the intermission fired-up, and opened the third quarter with an 8-to-0 run on their way to a 22-to-6 third quarter that had the Lady Cardinals start the fourth quarter with an eight point advantage. After opening a 12- point lead, Chadron’s defense faltered and the Lady Raiders mounted a fourth quarter comeback, with back-to-back steals and scores by senior Morgan Jaggers helping to narrow the Chadron lead to just two points, but the Lady Cards were able to hang on and make their free throws down the stretch to come out with the 54-to-46 victory, their second over Sidney this season. Jaggers led the Lady Raiders with 11 points while senior Karly Sylvester had 10 points and 10 rebounds for a double-double in the loss. The Lady Raiders again face Chadron in Sidney on February 12. 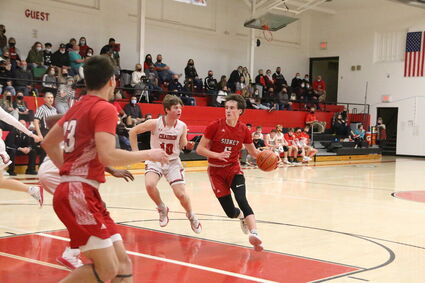 In the boy’s matchup, the Red Raiders were looking for payback on an early-season seven point loss against the Cardinals, and Sidney started hot, fueled by senior Zack Burke’s three three-point hits in the first quarter. Leading 17-to-12 going into the second quarter, Sidney continued the long-range assault by hitting five more three-pointers in the quarter, with two more by Burke, two by sophomore Jaeden Dillehay, and another by junior Sawyer Dickman to build a 34-to-28 lead at the half.

Sidney was able to match the Chadron scoring in the third quarter, and maintained their six-point advantage at 48-to-42 going into the final frame. The Raiders were able to build a 10 point lead late, but Chadron stormed back in the closing minutes to cut the lead to two at 59-to-57. Sidney was able to hang on and sink enough free throws at the end of the game to notch the 61-to-58 victory. Burke led the Sidney offense with 22 points in the victory while sophomore Micah Schneider added eight points down the stretch in the fourth quarter to end up with 14 points on the night. Sidney’s record improves to 9-and-8, and will host the Cardinals in Sidney on February 12.