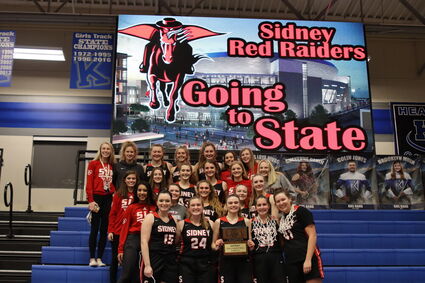 For the fifth straight year, the Lady Raiders are heading to the NSAA State Basketball Tournament, and this team again relied on their dominating defense to punch their ticket. This Lady Raider team will travel to Lincoln, looking to be the first Sidney team to win a State Tournament game since 1984.

It was fitting that a dominant defensive performance capped Sidney’s drive to a State Tournament appearance, as although the Lady Raiders have always been strong defensively, this team is loaded with players that consistently disrupt offenses and can steal the ball. In Thursday’s C1-8 District Finals match-up in neutral site Kearney, the Auburn Lady Bulldogs came into the game off a loss in their Sub District Final to C1 #9 ranked Syracuse, but with an impressive 17-and-5 record. However, it became clear early on that Auburn would struggle against Sidney’s fast and relentless full court pressure defense, and only periodic cold streaks by the Sidney offense kept the Lady Bulldogs in the game into the second half.

The first period ended with the score knotted 7-to-7, simply because after opening an early lead, the Lady Raider offense came up blank through the second half of the period and struggled with turnovers and missed shots. After Auburn took a 9-to-7 lead to open the second quarter, Sidney sophomore Reaghan Stanley buried a three pointer to re-take the lead. The teams traded scores until senior Morgan Jagerrs hit a three pointer to give Sidney a 15-to-12 lead. But again the Sidney offense went cold, just managing three additional points in the frame off of free throws, and Auburn narrowed the Sidney lead to 18-to-17 at the half.

The tight defensive struggle continued into the third quarter, with Auburn tying the score and the teams trading baskets until in the closing minutes of the the third period, junior Brynna Ross hit a three pointer for Sidney to extend their lead to 27-to-22, which was followed by four straight points by junior Alecca Campbell to close the period with a 31-to-24 lead. Sidney opened the fourth period by forcing a turnover followed by a layup by Ross for two more points, then turned up the defense and forced bad shots and turnovers by Auburn and turnovers, while the Lady Bulldogs looked for the big hit to get them on a run and back in the game. But the Lady Raiders connected from the field when they needed to and were steady at the free throw line, and pulled away. The defense was unrelenting, allowing no Auburn points in the fourth quarter as Sidney took the C1-8 Title, 43-to-24, and advance to the State Tournament.

It was not the best offensive performance by the Lady Raiders, as they missed too many inside shots and forced many three point attempts, but the defense controlled the tempo and never let Auburn build any momentum or go on any substantial scoring runs. Morgan Jaggers led the offense with 12 points in the victory. 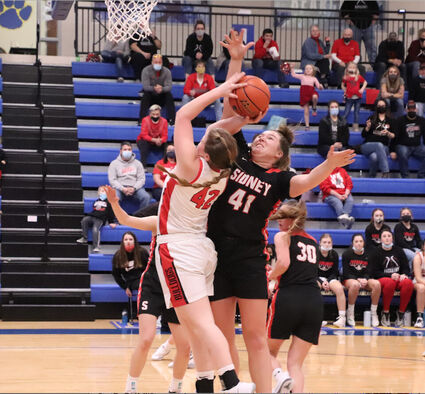 Sidney moves on to the first round of the State Tournament as the number seven seed in C1, and match up first against the 19-and-2 Lincoln Lutheran Lady Warriors who enter the tournament as the number two seed. Sidney Head Coach Tyler Shaw said of the Lady Warriors, “Lincoln Lutheran is a very athletic team. They have had a good season and will be a tough first round opponent. We will definitely need to take care of the ball as they apply a lot of pressure throughout the game. We will get back in the gym this week and emphasize valuing the basketball and attacking their press.”

The game tips off at 6:15 CT on March 3 at Pinnacle Bank Arena in Omaha. For more information on the 2021 NSAA Girls State Tournament go to http://www.nsaahome.org/basketball/.