Raiders End Season With a Loss 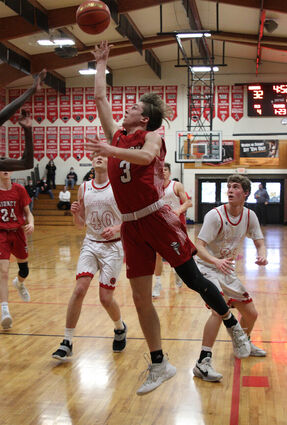 Sidney’s Red Raider Basketball team consistently improved throughout the year, but had a tough draw in the B-4 District Final game against the Mount Michael Benedictine Knights on Saturday afternoon in Elkhorn.

Timely three point shooting and aggressive, turnover-inducing defense by the Knights had them sprint out to a 28-to-10 lead at the end of the first quarter.

The tough defense continued into the second period, and the Knights combination of senior Brad Bennet and 6’7” junior Kuon Kuon were too much for the Raider defense as the Knights continued to score and opened a big 46-to-19 lead at the halftime intermission.

The game continued in similar fashion in the third quarter, with the Knights’ defense stifling any attempts by Sidney to narrow the deficit, and by the end of the period Mount Michael Benedictine had built a 72-to-30 advantage, initiating the running clock for the rest of the contest.

A final score of 82-to-42 had four Knights players scoring in double digits as the home team punched their ticket to the State Tournament. Junior Sawyer Dickman led the Sidney offense with 11 points in the loss.

Sidney ends their season with a 12-and-12 record, but with consistent improvement throughout the year and strong group of underclassmen that look to improve the Red Raiders’ fortunes over the next few seasons.